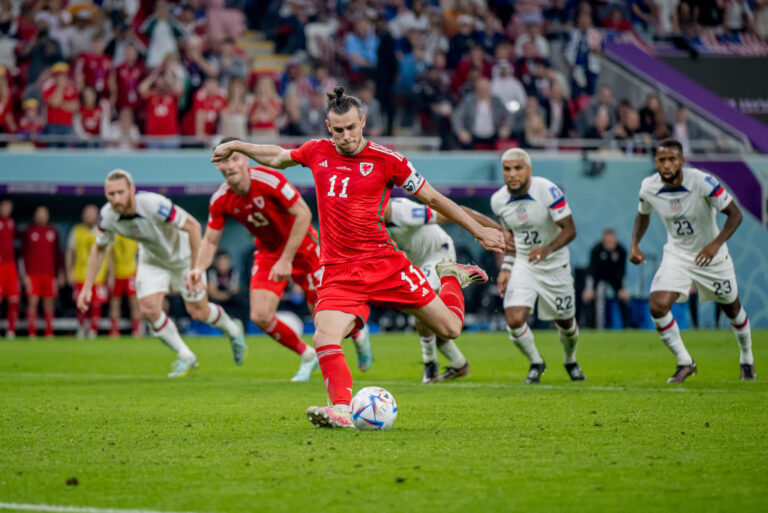 Day 2 of the World Cup saw a full schedule of games after the opening Qatar vs Ecuador match. For England and Wales, yesterday was their first action at Qatar 2022.

Wales got to experience their first World Cup match in 64 years as they went up against the USA. Meanwhile, England began what they hope to be a successful tournament run by facing Iran.

Elsewhere, Group A completed its first round of fixtures when Senegal took on the Netherlands.

An emphatic Three Lions made their best-ever start to a World Cup thanks to a 6-2 thrashing of Group B rivals Iran.

Following a frustrating first half-hour, England opened their World Cup account thanks to a wonderful header from Jude Bellingham.

Shortly after, a pair of strikes from Bukayo Saka and Raheem Sterling put the game beyond doubt by half-time.

As Iran vented their frustrations with fouls, the Three Lions grabbed their fourth. Bukayo Saka’s patient runs set up his second of the game as England continued to run riot. But three minutes later, Mehdi Taremi got Iran on the scoresheet thanks to a thumping finish.

This did little to stem the flow of goals down the other end, though. A series of substitutions reinvigorated Gareth Southgate’s side and brought more goals. Both Marcus Rashford and Jack Grealish found the net before Taremi gave Iran their second.

Overall, the clinical attacking display was a great sign for England fans to get excited about their World Cup prospects. Not that those in beer gardens need a second invitation to get amped up.

Away from Group B, Group A contenders Senegal and Netherlands played out a cagey affair. In their first World Cup appearance in eight years, though, the Dutch contingent left happier.

During a first half of few chances, Barcelona star Frenkie de Jong had arguably the best chance. He had a shooting opportunity in the box but took too many touches, and saw his effort blocked.

Senegal, despite offering a threat in behind with the pace of Ismaila Sarr and Krepin Diatta, struggled to trouble the Netherlands’ goal. In fact, it took the African champions 65 minutes to register a shot on target.

The Netherlands then wrapped up a hard-fought 2-0 win deep into injury time. Davy Klaasen got the goal, tapping home a rebound following a poor Mendy save.

With the win, Louis van Gaal’s side joins Ecuador at the top of Group A. In contrast, Senegal will look to get their first win when they play Qatar in their next match.

An end-to-end encounter between Wales and the USA ultimately saw the two sides share the spoils in Group B.

It was a night-and-day performance from Wales, who had a torrid first half but looked excellent after the break. The introduction of Bournemouth’s Kieffer Moore at half-time certainly improved Rob Page’s side as the USA could not handle his presence.

Before that, though, America looked in control. They spent most of the first half camped in Welsh territory and hit the post with a Josh Sargeant header. Eventually, their first-half pressure earned the USA a breakthrough.

Their talisman, Christian Pulisic, was instrumental. His run through midfield ended in a nicely weighted pass for Timothy Weah. The forward then composed himself before placing the ball past Wayne Hennessey. 1-0 USA at half-time.

Following the interval, Wales grew into the game and were a constant threat from set pieces. Ben Davies had an effort tipped over the bar, then Kieffer Moore flicked a header over, too. But it took a USA mistake for Wales to find an equaliser.

Wales earned a penalty in the 80th minute after a clumsy Walker Zimmerman tackle on Gareth Bale. The Welsh captain seized the opportunity, firing home the spot-kick and giving Wales a deserved point.

What do Groups A and B look like after World Cup day 2?

Ecuador and the Netherlands have taken early control of Group A. They both have three points thanks to their wins, plus identical goal differences. Their match in the second round of group-stage fixtures should be fascinating. Contrastingly, Qatar and Senegal are both stuck on zero points.

In Group B, England’s big win puts them two points clear of America and Wales. The commanding nature of their victory also boosts their goal difference, which could prove important. Iran, meanwhile, will look to improve against Wales in order to claim their first points of Qatar 2022.