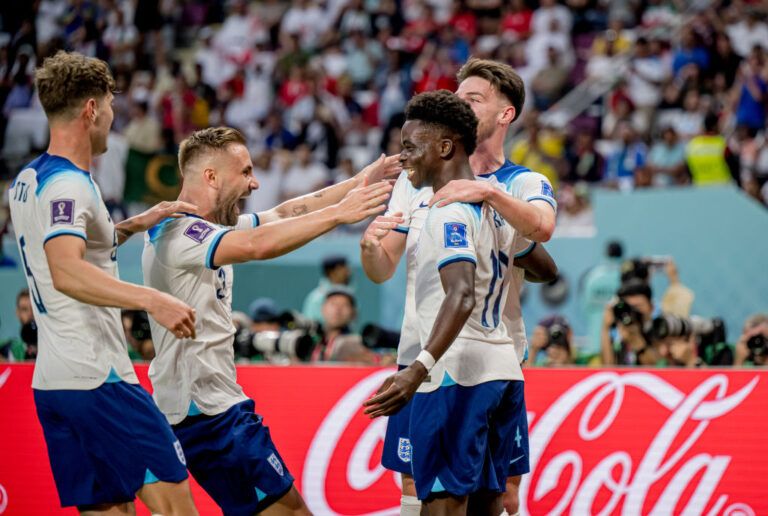 An impressive England side got off to their best-ever World Cup start thanks to a 6-2 win over Iran at the Khalifa International Stadium in Qatar,

This early tournament victory is a massive confidence boost for Southgate’s side ahead of their remaining group fixtures against Wales and the USA.

England run riot in first half

After taking a knee, England demonstrated that the pre-match stories had not distracted the squad. The Three Lions started brightly, with Harry Maguire causing a threat from set pieces in the early minutes.

However, an injury to Iran keeper Alireza Beiranvand slowed England’s momentum. The long pause for a head injury also played into the hands of Iran, as it then allowed them to get a foothold in the game.

Despite this, Southgate’s squad continued to dominate possession. This was mainly through forming solid chances via slick passing. Mason Mount went close before Maguire rattled the bar with a header from a set piece.

On the 35-minute mark, England finally made a deserved breakthrough. Following another England move, a Luke Shaw cross found Bellingham. The Dortmund midfielder flicked a header across the keeper into the far side netting to score his first-ever England goal.

With the first strike relieving tensions, England continued to cause their opponents problems. Their persistence was then rewarded at 43 minutes, where the earlier set-piece dominance finally made a difference.

United defender Maguire rose highest at a corner, nodding the ball into the path of Saka. He met the ball ahead of a crowd of defenders, firing his shot into the top corner thanks to a slight deflection.

Three minutes later, the Three Lions wrapped up the game thanks to a swift counterattack. In the first injury-time minute of 14, Raheem Sterling made it 3-0.

The impressive Bellingham then led the charge before flicking the ball through to Harry Kane. England’s captain drilled a cross to Sterling, who got ahead of his man to turn the ball home.

Iran responded to their disappointing first half with a trio of substitutions. Unfortunately, these had little impact on the game.

Looking to hold onto their advantage, England retained the ball as much as possible while trying to take the sting out of the match. Iran responded with frustrated fouls – Kane and Kieran Trippier feeling the force of their annoyance.

Just past the hour mark, England had their fourth thanks to Saka. The Arsenal starboy patiently feinted his way past defenders in the box before slotting the ball home.

But Iran was not ready to roll over. They fought back with a goal of their own. A clever disguised pass came through to star man Taremi, who rifled it home with a little help from the crossbar.

This ultimately proved the single highlight in what was a difficult day for the Middle East side. Rashford added another to England’s tally in the 70th, scoring his first major tournament goal just minutes after coming on.

However, England will be annoyed to have conceded two goals in such a dominant display when Taremi got his second via the penalty spot.

The commanding win sets a very high standard for England to maintain throughout this tournament as they look to go far in the World Cup. Additionally, this victory provides a welcome goal difference boost which could prove decisive.

England’s next match will be against the USA on Friday 25 November, followed closely by their game against Wales on Tuesday 29 November.