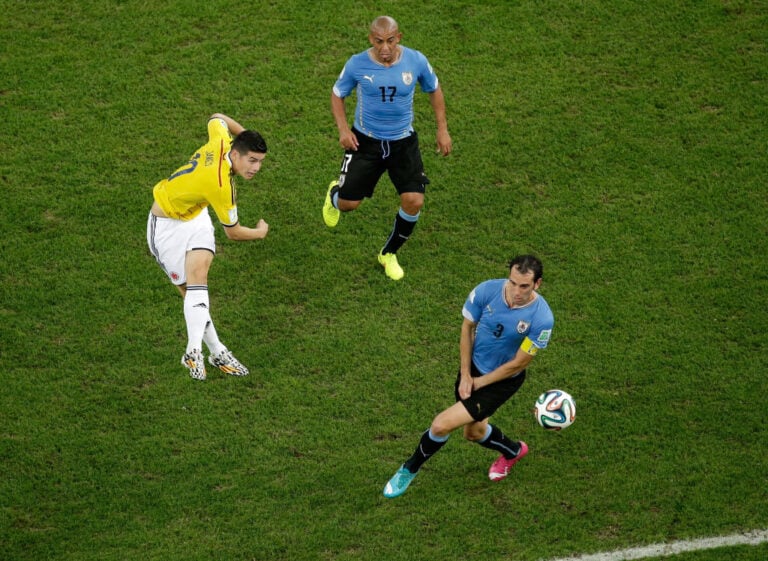 With the world set to focus its gaze on Qatar in just a few days, we are going to have a throwback to some iconic moments from previous tournaments. Here are the last four official World Cup “Goal of the Tournament” goals ranked from worst to first.

FIFA originally introduced the award for best strike at the 2006 World Cup in Germany. Therefore, the past four winners are also the first four – taking home a truly unique honour.

With the quality of finishes on show, any of these four goals could come in at number one. As a result, there is no specific basis for these ratings, just our opinion! So, your ranking of these four absolute screamers may differ from ours; there is truly no right or wrong answer.

Nevertheless, here are the four official World Cup goal of the tournament ranked, starting at number four through to number one.

One of the few players to master the notorious Jabulani ball, Diego Forlan earned the goal of the tournament award in South Africa. Out of his five goals at the 2010 World Cup, his sensational strike against Germany earned the plaudits.

Peeling off to the edge of the box, a cut-back cross searched for Uruguay’s talismanic striker. Then, in a stunning display of technique, Forlan connected with the ball on the volley. He managed to get his knee over the Jabulani, driving his shot into the ground. The ball then bounced off the turf once before flying past the helpless German keeper.

Unfortunately, Forlan’s award-winning goal was not enough for Uruguay to win the match. Germany overcame the South Americans 3-2, securing Die Mannschaft third place in South Africa. There was a silver lining for Forlan, though; he won the FIFA Golden Ball for the best player at the 2010 World Cup.

Diego Forlan will go down in history as the man to conquer the 2010 World Cup’s difficult football. His fantastic goal in the third-place play-off is a beautiful legacy of his expertise.

Coming in just ahead of Diego Forlan is the goal of the tournament from the last World Cup. Yes, Benjamin Pavard’s wonder goal is ranked only third on our all-time World Cup list – such is the strength of the competition.

The Frenchman’s finish came during his country’s round of 16 fixture against Argentina in Russia.

After a Lucas Hernandez cross evaded everyone in the box, the ball fell to France’s Pavard. Utilising the outside of his right foot, Pavard hit across the ball on the half volley. His beautifully controlled strike glided perfectly into the far top corner, with Argentina keeper Franco Armani diving in despair.

Pavard’s brilliant goal was the spark for France’s comeback in their knockout stage match. Responding from 2-1 down, the right-back got France’s equaliser as they beat Argentina 4-3. So, as well as being a screamer, Benjamin Pavard scored a vital goal, too.

The defender was an important part of the French side that managed to secure the world cup in Russia. After winning the greatest prize in football, surely this goal of the tournament award was an added bonus for the Bayern star.

Next up, we head back to the first-ever World Cup goal of the tournament and Argentina’s Maxi Rodriguez. Like Benjamin Pavard at number three, Rodriguez’s strike also came in the round of 16.

Unlike the Frenchman, though, Rodriguez’s thunderbolt was actually an extra time match-winner.

A slick series of passing saw a cross-field pass head towards Maxi Rodriguez. The Argentina midfielder then chested the ball into the air, before unleashing a rocket shot.  His strike, from outside the right-hand corner of the box, flew into the far top corner.

This magnificent hit sent Argentina fans into a frenzy, meanwhile, Mexico supporters could only watch on in despair. As a result of Rodriguez’s sensational goal, Argentina beat their opponents 2-1 in extra time.

But the Albiceleste’s 2006 World Cup journey ended at the next round. Following a 1-1 draw with hosts Germany, Argentina lost on penalties in the quarterfinal. You could not blame Maxi Rodriguez for this, though; the midfielder scored his spot kick in the shootout.

He can also take solace in being ranked second in our greatest World Cup goal list. Hope you feel honoured, Maxi!

Finally, at our number one slot is arguably the greatest World Cup goal of all time. James Rodriguez receives our No.1 ranking for his outrageous volley against Uruguay at the 2014 tournament.

There must be something about the round of 16, too; Rodriguez’s goal also came in the first knockout stage.

After an exchange of headers, the ball came to Rodriguez with his back to goal, about 25 yards out. Having looked over his shoulder to check the goalie’s position just before receiving the ball, James knew there was an opportunity to shoot.

So, in one smooth move, Rodriguez’s chest control helped him to pivot around and unleash a wondrous volley.

His amazing left-foot strike flew toward the goal and past the Uruguay keeper. Then, in a truly perfect fashion, the shot kissed the bar before bouncing into the roof of the net. The Colombian star’s strike was the most sublime combination of power and technique, and definitely earns the top spot on our list.

This award-winning volley from James was the opening goal in his country’s tie with Uruguay. In fact, he scored both as Colombia beat their South American counterparts 2-0.

However, the quarterfinals were a step too far for James and Colombia. In their first-ever last-eight appearance, Colombia suffered defeat at the hands of hosts, Brazil.

So, there you have it. We ranked James Rodriguez at number one in the best-ever FIFA World Cup goal of the tournament list. Do you agree with our choice? If not, which strike are you choosing? Let us know!