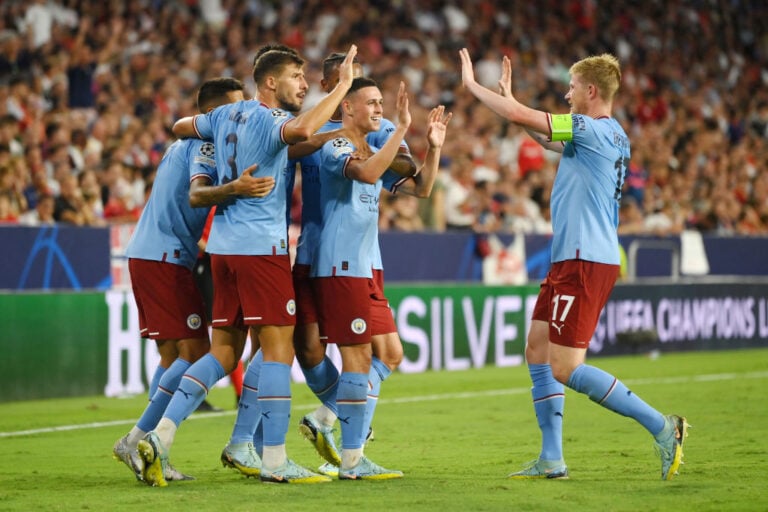 With arguably one of the best squads in football, Man City have a plethora of choices when it comes to players that could star at the World Cup. In the following list, we will narrow them down to just five talents.

However, City’s headline act does not make the cut. After Norway failed to qualify for Qatar, Erling Haaland will not be at the World Cup.

Regardless of Haaland, City boast some of the best players in the world that could really light up the winter tournament.

Arguably the best men’s football midfielder on the planet right now, Kevin de Bruyne has both the talent and form to really leave his mark in Qatar.

The Man City star has a historically good goal-contribution record at World Cup tournaments to back up his quality, too.

Throughout ten appearances at the 2014 and 2018 editions, De Bruyne registered two goals and four assists from midfield.

This also includes his famous strike against Brazil which fired Belgium through to the semi-finals in 2018.

Looking at this season, though, and the maestro has enjoyed a positive 2022/23 thus far.

As of the time of writing, he currently leads the Premier League in assists with nine whilst adding three goals to his tally too.

Aside from the stats, De Bruyne possesses a unique ability to pick apart a defence with wonderful passing – an invaluable attribute.

Provided that he can stay fit, De Bruyne will be the catalyst as to how far Belgium can go in Qatar 2022.

In the group stages, they face Croatia, Canada, and Morocco

This is by no means an easy group, so De Bruyne and his teammates will have to be on it from the get-go in order to advance to the knockout rounds.

Like Kevin de Bruyne, Joao Cancelo is easily among the best in the world in his position.

The versatile full-back oozes quality, regardless of whether he is playing on the left or right-hand side.

His creativity and ability in possession make him a key piece of Pep Guardiola’s team – and he will be just as important for Portugal come November.

Portugal scraped into the World Cup via the play-off stage, despite having a squad full of talented stars.

Their group for the 2022 tournament includes some tough matchups against Uruguay, South Korea, and Ghana, too.

Qatar will also be Cancelo’s major tournament debut for his country. He missed Euro 2020 after contracting COVID. But this fact should not phase him.

Cancelo will likely be at the heart of any Portuguese success. He has a knack for popping up with high-quality assists or being heavily involved in the build-up.

Additionally, his chemistry with Man City teammates Bernardo Silva and Ruben Dias should be of big benefit to his country at the World Cup.

Should Portugal have a solid run in Qatar, do not be surprised if Cancelo makes the Team of the Tournament.

A player that has been in blistering form this season, Phil Foden could really breakout at the upcoming tournament.

The 22-year-old has enjoyed a productive first 12 league games in 2022/23, coming up with a sensational six goals and three assists.

England fans will therefore hope that this output continues into November for the National team.

Before their pulsating 3-3 draw with Germany, the Three Lions found goals hard to come by in the recent Nations League Groups.

Similarly, Foden has found the net just twice for England in 18 caps. But, to be fair, some of these caps do include bench appearances.

He also has six assists, so his numbers are not bad at all.

This season, the talented midfield/winger has put himself in many more goal scoring positions, thus is reaping the rewards, too.

Gareth Southgate will look for more of the same in Qatar, where he could start Foden as part of his front three.

The Englishman’s footballing talent is undeniable; we will all eagerly wait to see him showcase it on the World stage.

If Foden is in-form, England could enjoy a great tournament.

Alongside Cancelo, Man City centre-back Ruben Dias should form the bedrock of Portugal’s defence at the World Cup.

Ever since making his debut, Dias has been a regular presence at the back for his country.

In 39 total appearances for Portugal, the 25-year-old has started 37 of them.

He is also very rarely replaced; in his 37 starts, Dias has only gone off twice, too. This includes Euro 2020, where the defender played every single minute as Portugal exited the tournament in the Round of 16.

Domestically, Dias has been part of a Man City side that has kept the joint-most clean sheets so far this season.

The Portugal star has started five of those clean-sheet matches, plus came off the bench in City’s 1-0 win over Leicester.

Heading to Qatar, Dias will want to ensure that his country improves on its underwhelming Euros campaign.

Meanwhile, Portugal will probably expect Dias to use his natural leadership qualities to shore up their defence and allow their attacking talent to carry them to the knockout stages and beyond.

Their back four will be counting on his outstanding defensive prowess to help them through Group H.

The final choice out of Man City’s star-studded squad is a tricky one to make. This could easily have been Bernardo Silva, Aymeric Laporte, or even Julian Alvarez

However, we have chosen Ilkay Gundogan as the man who could be a key factor in Qatar.

However, this pick could go wrong because Germany already has a wonderful array of choices in midfield.

With the likes of Joshua Kimmich, Leon Goretzka, and Jamal Musiala, to name a few, Gundogan may not start at the World Cup if he is not in form.

In 62 career appearances for Germany, though, Gundogan has started 45 times.

Additionally, he started seven of his nation’s 10 World Cup qualifying games under new Germany boss Hansi Flick. Gundogan came on in one other game, then missed two other qualifiers through injury.

But, if the Man City midfielder is on the pitch, he will be impactful. In recent years, Gundogan has developed a niche for scoring thanks to well-timed runs into the box.

During the 2020/21 season, he scored a career-best 13 league goals. Gundogan then followed this up with eight goals last season, and already has two strikes in 2022/23.

The German also has two goals in his last three international appearances. He, therefore, looks comfortable in that system, too.

With enough game time, do not bet against Ilkay Gundogan being an impactful player as Germany look to win a record-equalling fifth World Cup.

At a club level, Man City are looking like a team that are ready to conquer all.

On the back of that wave of confidence, the World Cup will be the perfect place for their players to show exactly why they deserve their plaudits.