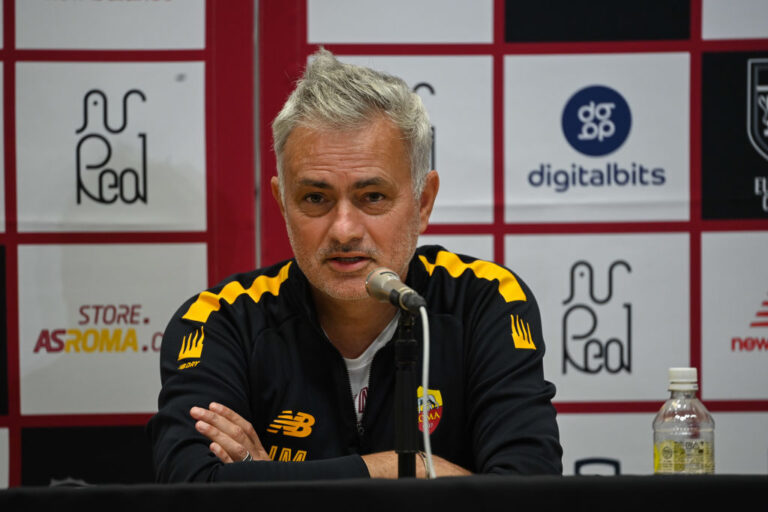 AS Roma boss Jose Mourinho has claimed that the shock World Cup story of Japan beating Germany is “not a crazy surprise” because of the difference in the teams’ mentalities.

This impressive result sent shockwaves throughout the football world, with Mourinho even sharing his thoughts.

Currently, Jose Mourinho and his Roma side are on a mid-season tour in Japan. So, unsurprisingly, local media asked for his opinion on the nation’s win.

“Of course, it is a fantastic achievement,” said Mourinho, via Sky Sports. “But to be honest, it was not a crazy surprise. Japan is a good team, has good players, and is getting an accumulation of experience at these events. A lot of the players also play in Europe, where they better understand the high-level game.”

Jose Mourinho then commented on what he believed was the key factor in Japan beating Germany.

“I think the mentality of the players and the team can also make a difference. At the moment, in European football, there is a big focus on the individual, and a big focus on egos.

“And when I look to your [Japan’s] profile as people and as a country… I never coached Japanese players, but I coached Asian players. In my case, I was lucky because I coached the best Asian players.

“I understand that the mentality is really special – that the team is the most important thing. People play for the team, and they don’t play for themselves.”

While arguably criticising attitudes on the European continent, Mourinho’s comments are clearly a glowing appraisal of Asian football. His Roma side must therefore be wary of this “team first” mentality in their upcoming games in Japan.

With just a handful of players travelling to Qatar, AS Roma are trying to keep their squad fitness up with a tour. The likes of Paulo Dybala and Rui Patricio will not be attending due to World Cup commitments, though.

Nevertheless, Jose Mourinho will put his side through their paces with a pair of matches against J-League opponents. Their first game, scheduled for tomorrow, is against Nagoya Grampus at the Toyota Stadium.

Following this, the Giallorossi take on Yokohama F Marinos on 28 November. As the reigning Japanese League champions, Yokohama could prove a decent test. Both fixtures are part of a “competition” for the EuroJapan Cup.

As it stands, these are Roma’s only official matches until Serie A resumes after the World Cup. Their next league game is not until 4 January, when they host Bologna.