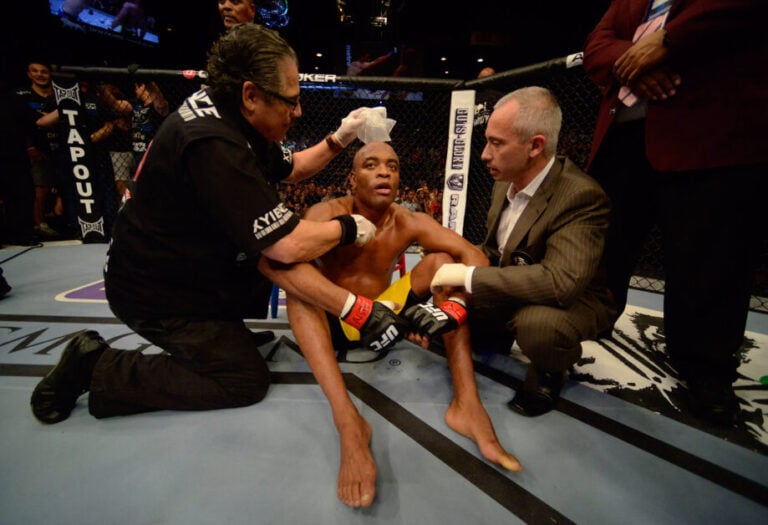 It seems, when you are at the top, it is hard to give up that crown and fighters in the UFC are not exempt from this flaw. From horrific leg breaks to sad losing streaks, these are the five worst ends to UFC careers.

BJ Penn is one of the most beloved fighters in UFC history. Penn built a reputation as one of the most fearsome competitors going at a time when the UFC was taking off. He is one of few in the history of UFC to have won two different belts (lightweight and welterweight). But he should have retired long before he finally called it a day.

Penn lost his lightweight title to Frankie Edgar at UFC 112 and suffered defeat again in the rematch. At UFC 123, he knocked out Matt Hughes but would then go on to lose all but one of his next eight fights. Not only did he lose, but he sustained heavy damage particularly in his bouts against Nick Diaz and Rory MacDonald.

After a hiatus of three years he returned in 2017 only to be violently knocked out by Yair Rodriguez. Penn eventually hung up his gloves in 2019.

The combination of knockout ability and supreme wrestling made Tyron Woodley one of the greatest welterweights in UFC history. He entered UFC 201 with an MMA record of 16-3 and went on to defeat Robbie Lawler. The victory gave him the welterweight title and he held the belt for 945 days before losing to Kamara Usman.

Since then, Woodley’s career has gone from sublime to surreal. Constantly chasing to be the fighter he once was, something in Woodley just looked broken. He lost that knockout power and he failed to win any of his next three fights. He left the UFC on the back of a four-fight losing skid.

After Ben Askren had become the first UFC fighter to be knocked out by YouTuber-turned-boxer Jake Paul, Woodley signed up to fight next. The once UFC great lost the first boxing bout on a decision. But Woodley’s embarrassment was dramatically increased when he was knocked out cold by Paul in the second fight. Whether the hefty fee he received for the contest was worth it, only he will know.

Discussions about the greatest of all time to fight in the UFC always feature Anderson Silva’s name. He holds the record for the longest title reign in UFC history (2,457 days) and secured 16 consecutive victories. Silva was flying high until he came up against Chris Weidman.

The Brazilian was the favourite going into UFC 162 but Weidman pulled off an upset to knock Silva out in the second round. With the defeat, the air of invincibility that had previously surrounded Silva vanished and his story only got worse in the rematch. Silva went for a leg kick only for his own bone to break in one of the most gruesome injuries in UFC history. He would eventually return to the octagon but won just one of his last six fights before retiring in 2020.

Perhaps only Conor McGregor can claim to have had more of an impact on MMA than Ronda Rousey. When the UFC wanted to introduce a women’s division, it was Rousey that was chosen as the headline act. Her defeat of Liz Carmouche for the bantamweight title began a period of dominance not matched until Amanda Nunes as she wracked up a 12-0 MMA record.

But Rousey’s UFC empire came crashing down in November 2015. Her opponent at UFC 193 – Holly Holm – had not been given a chance by most but she would go on to land one of the most iconic knockouts in UFC history. A head kick left Rousey seeing stars and the follow-up punches meant she lost for the first time in her MMA career. The legend of Rousey ended that night and she fought just once more in the UFC – suffering another KO – before switching to WWE.

The 2008 Olympic wrestler and two-time NCAA champion was a welcome addition to the UFC’s roster in 2019. His wrestling prowess had earned him a 19-0 MMA record, meaning expectation was high for ‘Funky’. In his first bout at UFC 235, he choked out Robbie Lawler, and his prestige in the game only grew.

Until Jorge Masvidal came along.

The feud between the two reportedly started 10 years before their fight when they wrestled together during a gym workout. Something ticked Askren off, and he had allegedly badmouthed Masvidal since. Askren wanted the bout, but as Masvidal was an established UFC star, he knew there was only one way he could get Masvidal to agree: Askren trash-talked him at every opportunity.

Masvidal thought he overstepped the mark, and it led to a booking. However, it blew up in Askren’s face. A flying knee from Masvidal seconds into their bout became the most iconic knockout in history. Askren would only fight in the UFC once more, losing by submission to Demian Maia. A whimper of an ending.