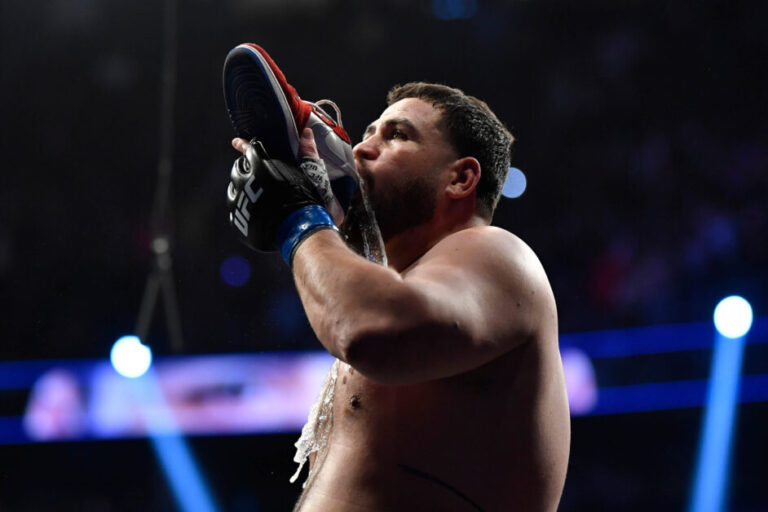 Some UFC fighters celebrate victories with their team; others jump on the cage. For Tai Tuivasa, nothing says victory like a shoey.

The ‘shoey’ is a celebration that is popular with Australian athletes and Tuivasa is no different.

After defeating Augusto Sakai at UFC 269, he hopped onto the fence to celebrate the only way he knew how.

He beckoned to the crowd to toss him their shoes and then asked for a beer. He then poured the liquid into the shoe and chugged it while the crowd cheered him on.

Now, he has promised to take it up a notch in his next fight.

After beating Sakai, Tuivasa was slated for the co-main event at UFC 271 where he is up against No. 3 ranked heavyweight Derrick Lewis.

Given the rise to a co-main event, Tuivasa has jokingly promised an extra special celebration should he earn the win.

“He can throw it to me when I win and I’ll do a ‘cupey’ out of his ball guard,” Tuivasa told reporters at the media day. “I’m keen.”

Tuivasa was referencing an incident from UFC Vegas 45 when Lewis threw his cup into the crowd after beating Chris Daukaus.

Whether Lewis is willing to gift it if he does lose remains to be seen.

What is the shoey?

Drinking from your shoe, commonly known as a ‘shoey,’ is a tradition that actually dates back to 1800s Germany but has seen a revival more recently.

It is particularly popular among Australian athletes, most notably with Formula 1 driver Daniel Ricciardo.

During his Red Bull days, Ricciardo made it to the podium frequently and would celebrate by removing the shoe he had just sweat in for the past two hours and drink champagne from it.

He did so again when he earned a rare win last season while racing for McLaren.

The Australian even managed to get his boss Zac Brown and teammate Lando Norris to have a swig.

Ricciardo is not the only one though and Tuivasa told ESPN “all Aussies know what it is.”

“It’s just something you do when you’re partying with all your mates,” he said.

“I was just thinking what’s the fastest way to get [alcohol] into me after the fight, so I thought I’ll just start doing shoeys when I walk out. And it has stuck. It’s become my thing now.”