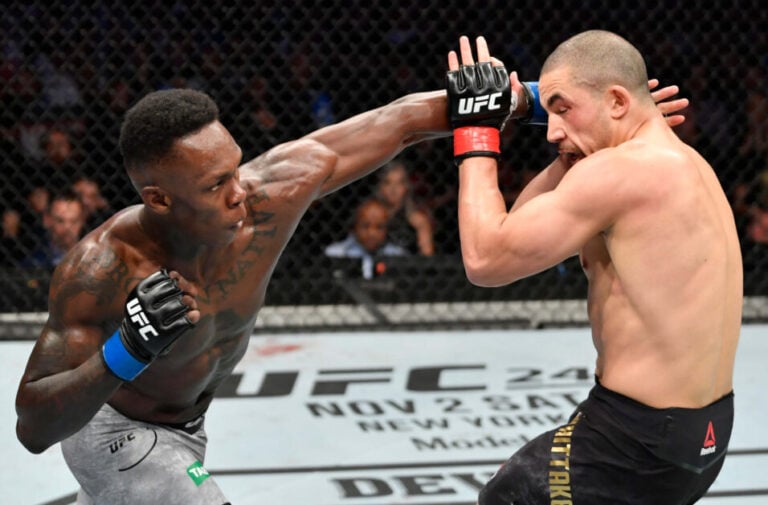 More than two years after their last bout, Israel Adesanya and Robert Whittaker will face each other inside the octagon once again this weekend. Read on to find out the UFC 271 UK start time, as well as who else is on the card.

The two New Zealanders last faced off in front of a packed Marvel Stadium in Melbourne.

In the 2019 fight, Adesanya entered as the interim champion looking to take Whittaker’s belt from him.

The Last Stylebender did precisely that. A flurry of punches in the second round had Whittaker stumbling to the floor. Adesanya pressed home the advantage with some hammer-fists before referee Marc Goddard stopped the fight.

With the knockout, Adesanya became the undisputed champion, and he has held the title ever since.

Now, Whittaker is back to take what was once his.

Since losing to Adesanya, the 31-year-old has gone on an impressive three-fight winning steak. In that run, he defeated Darren Till, Jared Cannonier and Kelvin Gastelum to earn the title of number one contender.

Adesanya has also been active. He has defended his belt against Yoel Romero, Paulo Costa and Marvin Vettori.

The only imperfection in his copybook is a decision defeat to champion Jan Blachowicz in his debut light heavyweight bout.

Now back at his favoured middleweight, Adesanya will be confident of improving on his 21-0 MMA record.

When is the Israel Adesanya vs. Robert Whittaker II start time?

The fight occurs at the Toyota Center, Houston, and the early prelims will begin from 11pm GMT.

The prelims will start at 1am GMT, and the main card at 3am GMT.

Adesanya and Whittaker should make their way to the octagon at approximately 5.15am GMT.

How can I watch Israel Adesanya vs Robert Whittaker II in the UK?

Coverage will begin at 1am GMT on BT Sport 1 HD. BT Sport customers can also watch the fights on the BT Sport website and mobile app.

How much does the fight cost?

If you are not a regular BT Sport customer, you can buy a monthly pass for £25.

Reigning middleweight champion Israel Adesanya will take on number one contender Robert Whittaker in the night’s biggest fight, but it is a stacked card elsewhere.

In the co-main event, No. 3 ranked heavyweight Derrick Lewis takes on No. 11 ranked Tai Tuivasa. The winner of that could then face Ciryl Gane or Stipe Miocic in a bid to become the number one contender to Francis Ngannou’s crown.

While the No. 3 ranked middleweight fights the No. 4 when Jared Cannonier faces Derek Brunson.