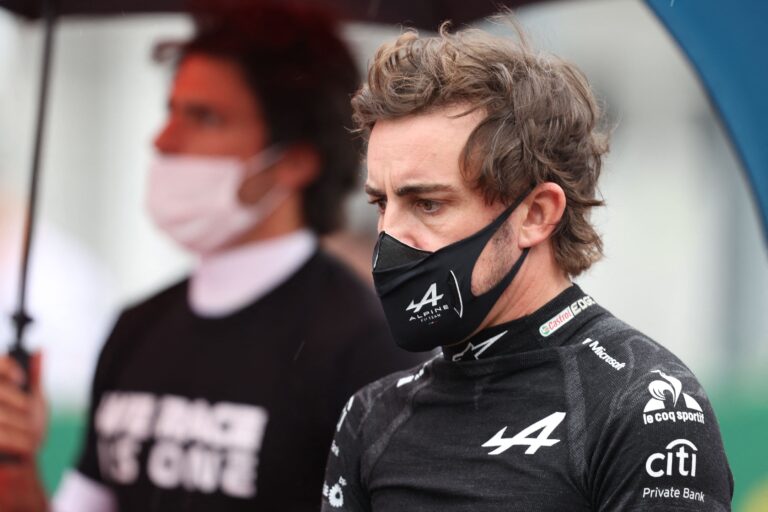 Alpine have confirmed that two-time world champion Fernando Alonso will race for the team in 2022 after signing a one-year contract extension.

The 40-year-old rejoined Formula 1 in 2021, having spent two years away in other racing disciplines.

It took the Spaniard time to re-adapt to the sport after those two years, and he finished behind team-mate Esteban Ocon in four of the opening five Grands Prix.

However, Alonso has finished in the points in every race since his excellent sixth-placed finish in Azerbaijan back in June.

He then showcased his typically exceptional defensive driving during a fourth-placed finish in Hungary last time out.

Alonso’s performance, in keeping Lewis Hamilton behind him for 10 laps, helped team-mate Ocon – who led 66 out of 70 laps – to win the race for his debut victory in F1.

Now, the Spaniard – who won two world drivers’ titles with the formerly-named Renault team in 2005 and 2006 – will remain in the sport for at least another a year.

“I felt at home the moment I returned to this team and have been welcomed back with open arms.

“It is a pleasure to work again with some of the brightest minds in our sport at Enstone and Viry-Chatillon.

“It’s been a tricky season for everyone, but we’ve shown progress as a team and the result in Hungary serves as a good example of this progression.

“We are targeting more positive memories for the rest of this season, but also crucially from next year onwards with the new regulation changes coming into F1.”

Alpine CEO, Laurent Rossi, added: “Fernando has impressed us all since he returned to the sport at the beginning of this year.

“His dedication, teamwork and focus to extract the maximum from the team is incredible to be a part of and certainly special to witness.

“His performance in Hungary was another example of his racing pedigree and reminded everyone how skilled a driver he is.

“I am convinced we can benefit strongly from Fernando’s insight and experience as we enter the final development and optimization phase of the 2022 chassis and power unit.”

Formula 1 returns from its summer break this weekend with the Belgian Grand Prix, which is held at the historic Spa-Franchorchamps circuit.