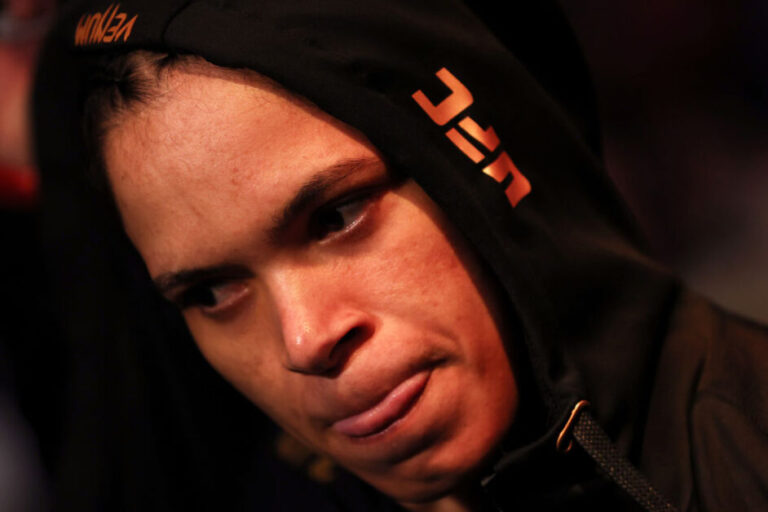 Amanda Nunes may have lost her belt at UFC 269 to Julianna Pena, but ‘The Lioness’ is already hunting for an opponent for her next fight.

The result was unequivocally one of the biggest upsets in UFC history. Pena was a huge underdog going into the fight, and many expected Nunes to record a comfortable victory to extend her winning streak.

It seemed almost a given that she would destroy her opponent with relative ease. But the underdog made a mockery of the bookmaker’s odds.

The American had to endure a torrid opening round, but she took complete control as soon as the second segment started. Pena began blasting Nunes with a series of power shots, leaving the champion rocked to her core.

The 32-year-old took the legendary fighter down before she began to look for the submission. Pena wrapped her arms around Nunes’ neck to perform a rear-naked choke. In one of the most incredible moments the UFC has ever seen, the Brazilian tapped. The era of the Lioness was over.

Her reign has come to an end for now. But it won’t be long until she returns in pursuit of another shot at the belt. We’re looking at three potential opponents that Amanda Nunes could fight next.

For now, there’s a new champion in the 135-pound division. We don’t know how long Pena will keep hold of the belt or if she’ll even be able to win a rematch with the Brazilian. But what we do know is that she’ll be more confident than ever before.

Nunes will undoubtedly be desperate to get her hands on Pena again, especially after the American made some very controversial comments at the post-fight press conference.

The new champion insinuated that she was more of a mother than Nunes and offended many parents in the process.

She said: “The UFC absolutely needs to create a new belt for me, and it needs to be the ‘Baddest Mom on the Planet’. I’m not trying to take anything away from Amanda. She’s a wonderful mother, but I gave birth to my daughter, and I feel like for giving birth, I am the first mum champ, and that is also a feather in the cap.”

Following her statement, the fire will be burning inside The Lioness more than ever. If she does get another opportunity against Pena, then she’ll be looking to leave it all in the Octagon.

A trilogy bout with ‘The Bullet’ has been marinating for years. The reigning flyweight champion has wanted nothing more than to get her hands on the 33-year-old since she was on the wrong end of a controversial decision in 2017.

With the result last weekend considered, the UFC may finally decide that now is the right time to give the fans what they want to see.

Nunes and Shevchenko are universally considered the two greatest female fighters of all time. Therefore, MMA enthusiasts are desperate to see one final fight between the pair before they eventually decide to hang up the gloves.

The Mexican sensation is currently in the best form of her life. In July, she secured the best win of her career against Yana Kunitskaya. She dropped the tough Russian with a thunderous left hook before finishing her with a lethal display of ground and pound.

Aldana has more than earned her shot at a big name. And after Nunes’ most recent fight, she’ll be very confident in beating the former champion.

Who will Amanda Nunes fight next?

Irrespective of the result against Pena, ‘The Lioness’ still deserves the accolade of the most dominant female fighter of all time. Over five years, she dismantled every challenger who came her way. But when she was the nail rather than the hammer, she couldn’t survive the fire.

In all likelihood, the rematch with the reigning champion is next, and if she wants to beat her, then she’ll have to dig deeper than she ever has before.

Five most fascinating moments from UFC 266