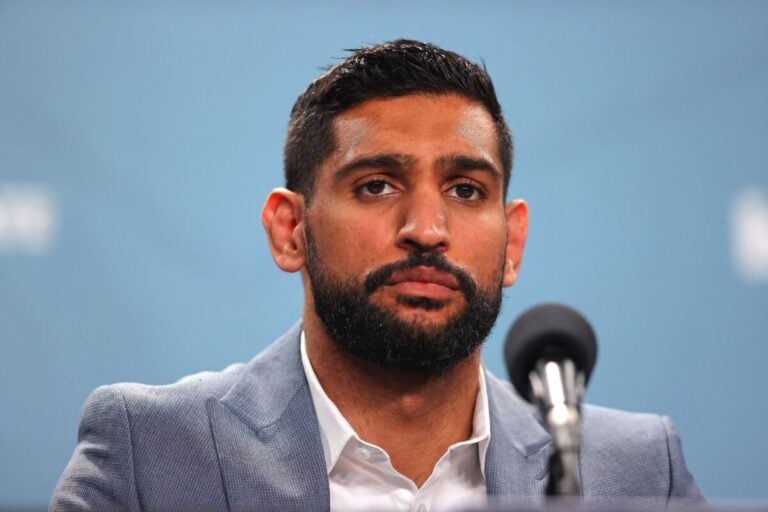 Amir Khan has treated boxing fans to many unforgettable memories over the years, but after suffering a massive defeat, it seems retirement is just around the corner.

After a ten-year-long rivalry, the 35-year-old finally collided with Kell Brook in the ring. Despite both being past their best, their bitter feud captivated the country.

The hatred radiated from the fighters who were both ready to do the business after a decade of waiting.

It didn’t matter that there wasn’t a world title at stake. Brook desperately needed to secure a legacy-defining win, while Khan wanted to prove that he’s always been a step ahead of his adversary. This fight meant everything.

On February 19, they finally settled the grudge once and for all. Brook entered the ring to his usual ‘All of the Lights’ theme. Meanwhile, the Olympic silver medalist walked to the squared circle to ‘Ain’t Nobody’. That was an apparent psychological dig, considering Terence Crawford used the same song before knocking out the Sheffield boxer.

Khan appeared as quick as ever as the fight began. His mesmerising hand speed looked like it could cause his opponent problems. But after just two minutes of the opening round, Brook utilised the best element of his game—timing.

He landed a beautiful stiff jab that buckled Khan to his core. And despite showing an incredible amount of heart, he never recovered.

His rival battered him around the ring from that point on until the referee compassionately called a halt to proceedings. At that moment, Brook proved precisely why they call him the ‘Special One’. He’d finally secured his big win.

The Sheffield fighter has plenty of options on the table to further his legacy. But as he focuses on what’s next, Khan is staring at the end of the line.

Is Amir Khan set for retirement?

Going into the contest, the legendary athlete hadn’t fought since a four-round blowout of Billy Dib back in 2019. This inactivity clearly played dividends with the courageous fighter looking a step behind Brook all night. But at the age of 35, is there much else he could’ve done?

Khan represented Team GB at the 2004 Olympic Games in Athens before leaving it until the following summer to turn professional. And after a 17-year-long career, it appears that Father Time has finally caught up with him. In his post-fight interview with Sky Sports, he finally buried the hatchet with Brook and revealed that the writing is well and truly on the wall.

Read: Amir Khan claims that Floyd Mayweather was afraid to fight him

He admitted: “I just couldn’t get it going. No disrespect to Kell Brook. He put a great performance on and did everything he needed to. He was the best man tonight. I had a great, great training camp, but I just couldn’t get going. I was missing quite a lot. Kell was on his A-game. All respect goes out to him.

“40 fights is a lot of fights. Winning two world titles, fighting up and down America and around the world.

“I need to sit down with my family, but I think it is more towards the end of my career now. That love for the sport is not there anymore like it was before. I used to have that excitement and that push. But I just didn’t have it in me. I felt quite flat.

“I think that’s maybe a sign for me to know that I should be calling it a day, but let’s see.”

If this really is the end for Khan, what a career he has had.

Regardless of what happened on February 19, Khan’s legacy was already secured. The Bolton man came from humble beginnings before showering himself in glory at the Olympics and winning two world titles in the professional ranks.

He accumulated one of the best resumes in British boxing history. He schooled Andreas Kotelnik, dismantled Devon Alexander, and produced an iconic performance against Marcos Maidana.

It didn’t matter whether he won, lost or drew. Fans bought tickets to see ‘King’ because they knew he guaranteed excitement. So if Amir Khan is about to enter retirement, then the long-lasting memory he’ll leave is one of a man who was undeniably one of the best we’ve ever produced.

Jake Paul retires from boxing – and promptly comes out of retirement