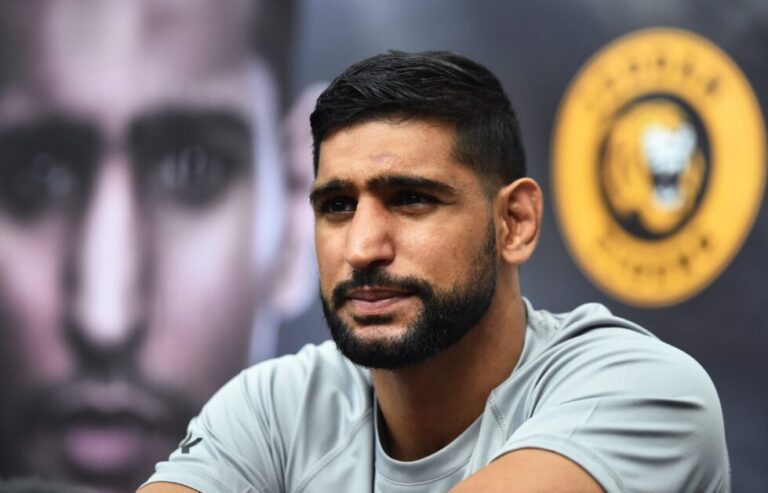 Amir Khan has enjoyed a storied boxing career, having fought against some of the biggest names in the sport in their respective weight categories.

The Brit hasn’t set foot in a boxing ring since July 2019, when he defeated Billy Dib via technical knockout.

He is set to fight again on February 19 against Kell Brook, who himself hasn’t boxed since November 2020. There will likely be some ring rust when both men get the action started.

In Khan’s case, his long break from boxing has allowed fans to discuss his legacy. At 35, the Brook bout could be one of the last times we see ‘King’ in the ring.

He is a former WBA and IBF light-welterweight champion, whilst he also took on Canelo Alvarez in an unsuccessful attempt to become the middleweight champion.

In addition, ‘King’ won the silver medal at the Athens Olympics in 2004. The pedigree, then, is certainly there. Khan also very nearly had the opportunity to fight one of the greatest of all time – but the man in question turned him down.

Floyd Mayweather is unlike any other fighter in modern boxing circles. His 50-0 professional record is the stuff of legend. His legacy is his undiminished ability to see off all-comers, no matter how talented they were.

But he once turned down a boxer who, in 2014, was still close to the top of his game. Amir Khan.

‘King’ was in the running to take on the American legend. With Mayweather holding the light-middleweight belts, it would have been an opportunity for Khan to become a world champion once again.

‘Money’ won the bout by majority decision before emerging victorious via unanimous decision in the rematch four months later.

Now, speaking in an interview with iNews, Khan explained that his bout against Alvarez was ultimately made in place of a potential Mayweather showdown.

He explained: “When Oscar [De La Hoya] called me, I couldn’t say no. Maybe I’m too brave for my own good.

Khan then revealed that he contemplated retiring after losing to Alvarez but said he couldn’t turn down the opportunity to beat Brook.

“I would have called it a day, but I felt I couldn’t leave the sport without taking this fight and putting a stop to him and all the talking he is doing,” he said.

What could have happened in a Mayweather v Khan bout?

By the time of his 2015 victory over Andre Berto, which extended his professional record to 49-0, Mayweather’s career was beginning to wind down. He even had to defend the choice of Berto as his final opponent, calling him “exciting“.

Perhaps a fight against Khan, who was also linked on that occasion, may have provided Mayweather with a much sterner test. The American dominated Berto, and despite not finding the knockout, it was still a comprehensive victory.

And it also has to be remembered that, when Mayweather turned down Khan in favour of Maidana, ‘King’ had already beaten the Argentinian fighter. Essentially, he became first in line. But it wasn’t to be.

Fans will never know what could have happened had Floyd Mayweather accepted a fight against Amir Khan.

Of course, both men achieved vastly different things in their careers. The Bolton-born man cannot be placed in the same category as one of the best boxers that ever lived. But a bout between Khan, who would have been preparing for the biggest opportunity of his life, and Mayweather, defending his title belts and unbeaten record for one of the final times, would have been worth a watch.