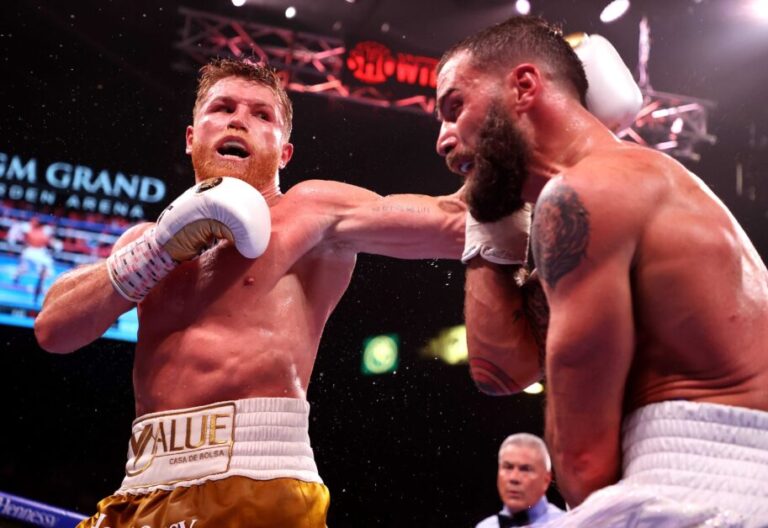 Canelo Alvarez is almost unbeatable, but several boxers think they could defeat the Mexican in his next fight.

The superstar has become one of the biggest names on the planet. He appears to be still getting better and better.

Over the past year, Canelo has proved why The Ring Magazine has him ranked as the number one pound-for-pound fighter on the planet. His journey towards emerging as the undisputed world champion in his weight class has been nothing short of phenomenal.

Picking up all four belts

Having claimed the WBA and WBC titles the previous year in a contest against Callum Smith, Canelo entered 2021 with one goal in mind – to win the other two belts.

He started the year with a third-round stoppage over an overmatched Avni Yildirim before setting his sights on the two big players in his division.

Despite struggling to find his range against the crafty Billy Joe Saunders, the Guadalajara native eventually caught up with the WBO Champion. He timed the slippery southpaw to perfection with a beautiful uppercut to break his eye socket. Feeling he could not continue, Saunders pulled out at the end of the eighth round.

In the aftermath of his victory, Canelo was left with only one belt to collect – the IBF title. But to capture it, he had to take on the supremely-gifted Caleb Plant. For eleven rounds, the boxing legend seemed bamboozled by the boxing clinic that the American was attempting to put on.

However, Canelo’s experience played dividends. He caught his opponent with a thunderous left hook that sent Plant crashing towards the canvas. He bravely rose to his feet, but his senses were scrambled. The Mexican jumped on his prey and closed the show conclusively.

Although he has achieved his lifelong dream of conquering an entire decision, there are still plenty of potential opponents for the all-time great. But who will Canelo Alvarez fight next?

According to The Sun‘s Mike Coppinger, a bout between the Mexican and Charlo is very likely. Canelo is renowned for entertaining his fans on the annual Cinco De Mayo weekend in May, and Charlo looks like he could be the man to secure the pay-day next.

The technically-gifted operator has long awaited his opportunity at the big time, and now he may have a chance to prove how good he is. The former IBF super-welterweight champion has shown natural talent in accumulating his 32-0 record. But he’s never faced an opponent of anywhere near the calibre of Canelo.

Seven Brits have attempted to dethrone Canelo, and seven Brits have failed. But perhaps Derby’s finest can be the man to turn that all around. The Frank Warren-promoted boxer has worked his way to the number one contender position with WBO. Therefore, Canelo will either have to fight him or vacate the belt.

The 6ft 1in powerhouse is emerging as a genuine threat in the division. But he is yet to operate at the elite level, which could be his undoing if he can secure the bout with the Mexican.

Although some may scoff at the inclusion of Jake Paul on the list, it can’t be denied that he’s making all the right noises. Yes, in reality, there is little to no chance that we’ll ever see a Canelo-Paul fight. But the 24-year-old will continue to wind the world up by flirting with the possibility.

Although an outing against the sporting legend won’t happen next, it appears the YouTuber may tango with a former Canelo opponent. The rumour mill is rife with talk that the ex-Disney star is willing to take on former world champion Julio Cesar Chavez Jr.

Read: Jake Paul steroid accusations: Why are so many UFC alumni talking about it?

In what would perhaps be his most formidable potential challenge, Canelo may dare to be great in a fifth weight class. The WBC recently ordered a contest between the Mexican and reigning cruiserweight king Ilunga Makabu. Although the boxing public remembers the massive puncher for getting wiped out by Tony Bellew, he has improved massively since then.

He emerged victorious in a firefight with Dmitry Kudryashov before claiming his world title against Michal Cieslak. Should the Congolese man get through his next test against Thabiso Muchunu on January 29, then he’d more than fit the bill for Canelo’s next fight.

This thunderous puncher is perhaps the most dangerous man on the planet. Every time Beterbiev steps into the ring, he guarantees excitement. His 100% knockout ratio in 17 fights speaks volumes about the incredible power he carries in his gloves.

In his last bout, despite a torrid cut on his forehead, he was still able to get the job done against Marcus Browne.

However, the unified light heavyweight king is hittable. Therefore the Mexican may fancy his chances if he can develop the perfect game plan.

We don’t yet know who Canelo Alvarez will select as his next fight, so the boxing world will have to wait patiently for the 31-year-old to make a decision.