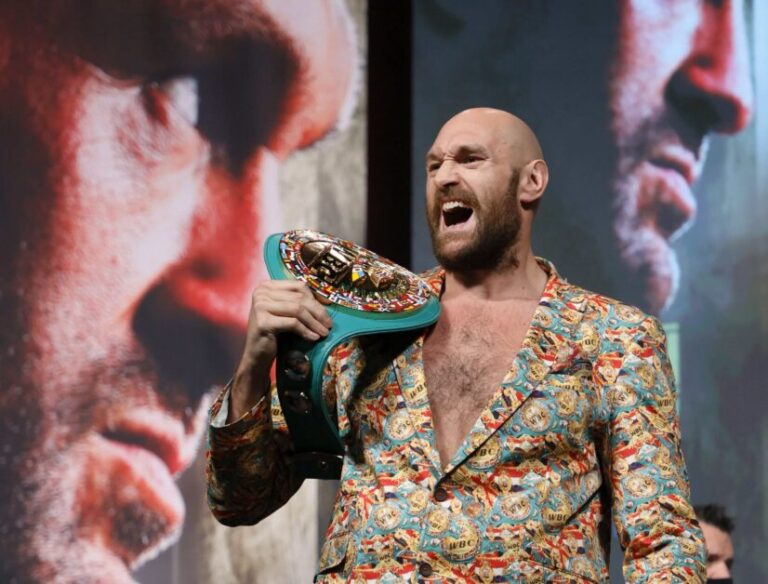 Tyson Fury has aimed a fresh taunt towards Anthony Joshua over his surprise defeat to Oleksandr Usyk in September.

Joshua suffered the loss via unanimous decision after struggling to match his Ukrainian opponent’s power or sheer amount of punches.

The Watford-born fighter lost his heavyweight titles as a result. It was his second high-profile defeat in just over two years following his shock loss to Andy Ruiz Jr in June 2019.

In October, he told iFL TV that he was “f***ing sick of losing”.

A rematch between the pair is set to take place, with Joshua’s promoter Eddie Hearn targeting a date of April for the fight.

He said: “The preferred venue will be the UK, in which case we would have to do the fight outside, and we’re not really interested in doing that in March.

“I feel like it’s a must-win for AJ. If we have the opportunity to stage the fight in the UK we should do it, and if he can win that fight on home soil, it would be pretty special.”

Even if Joshua does succeed in the rematch, there will still be some in the boxing world that will remind him of past events.

Before the original Usyk fight was announced, all avenues pointed towards the 32-year-old taking on Tyson Fury in what would have been a show-stopping undisputed title bout.

But a US judge ruled in mediation that Fury had to compete in a trilogy bout against Deontay Wilder, which put those plans on the backburner for a while.

With Joshua now set to take on Usyk, and Fury in talks to fight Dillian Whyte later this year, a potential dream matchup between two of Britain’s biggest stars seems further away than ever.

But that’s not to say that ‘The Gypsy King’ has forgotten about his rival. Far from it. In fact, the Morecambe-based fighter had a few words to say to Joshua during an intense training session.

In a video posted on social media, he exclaimed: “You know what I can’t believe? That AJ has gone and given Ukraine all the heavyweight belts back, after all my hard work of relieving them. You big, useless dosser.”

He then made a claim: “You’ve let a little steroid man come up from middleweight and take the belts off you … You useless dossers, honestly. Bring them to me, ‘The Gypsy King’, bring them to me, and I’ll put them in their place. I’ll relieve them of the belts again.”

What is next for Fury?

Tyson Fury is training in preparation for his next fight – but we don’t yet know the identity of his opponent.

The WBC has given him a one-week deadline to agree to a bout with mandatory challenger Dillian Whyte. The pair have history, with Whyte once claiming that he dropped ‘The Gypsy King’ in sparring. Therefore, there’s already plenty of animosities, which would make a potential face-off fascinating.

Fury would be the heavy favourite to retain his status as heavyweight champion of the world, but that doesn’t mean the build-up surrounding the fight would not be genuinely box office.

If the Whyte bout collapses, a unification bout against Oleksandr Usyk could be his next step. Maybe one day, we will finally get the dream Anthony Joshua v Tyson Fury showdown that would captivate British and world boxing fans alike.