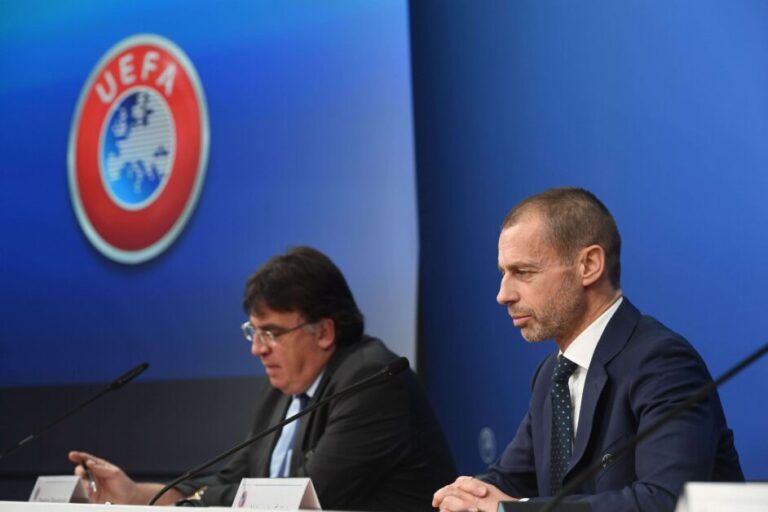 A reported potential agreement as a result of UEFA’s new Champions League format could bring an end to any chance of a European Super League.

The controversial breakaway competition was initially proposed back in April. There were 12 founding clubs involved, including Arsenal, Chelsea, Liverpool, Manchester City, Manchester United and Tottenham Hotspur.

However, it went down terribly among football fans. Supporters and players from all around Europe voiced their displeasure. Gary Neville was one of the leading figures who expressed their anger and fury at the proposals.

Read: How the footballing world has reacted to the European Super League announcement

Some fans even threatened to boycott going to the games of the clubs involved. UEFA initially threatened to ban any players appearing in the Super League from their competitions.

Eventually, the English teams involved began to see the light. They all withdrew. The Super League fell apart.

Although the fan backlash was enough to prevent clubs from breaking away from UEFA, it wasn’t enough to rescue the Champions League in its current guise.

The competition has been given a massive revamp. The field will extend from 2024/25 to 36 clubs playing in one huge group. Each team will play against 10 other teams. Half of those games will be at home, with half away.

Although UEFA labelled the news as a triumphant success, managers and fans were not quite so pleased. Manchester City boss Pep Guardiola and Liverpool manager Jurgen Klopp were amongst those to slam the new competition.

Despite the effective ‘death’ of the Super League following the decision of nine clubs to pull out, three still remain. Barcelona, Real Madrid, and Juventus are desperate to get the plans up and running again.

In October, all three teams planned to take UEFA and FIFA to court, accusing them of breaking EU competition rules. Their primary motivation is to change the way football is run. In turn, that could lead to top clubs having greater control.

However, new data could now deal those teams a huge blow. It could give UEFA a key advantage over the rebels, and end what remains of any plans for the Super League.

According to The Times, UEFA expects that the TV and commercial rights for their new Champions League format will improve by 40 per cent to more than €5 billion per year.

The report states that, on January 21, they received bids from four agencies to sell the rights on their behalf across the globe. Currently, income from commercial rights is expected to be recorded at €3.6 billion this season.

This will generate a considerable rise in money going to the clubs involved in European competitions. That will help UEFA fend off the remaining Super League rebels, who are fighting in court to try and breathe fresh air into the controversial tournament. Fans will be eager to find out whether they can in the coming weeks and months.