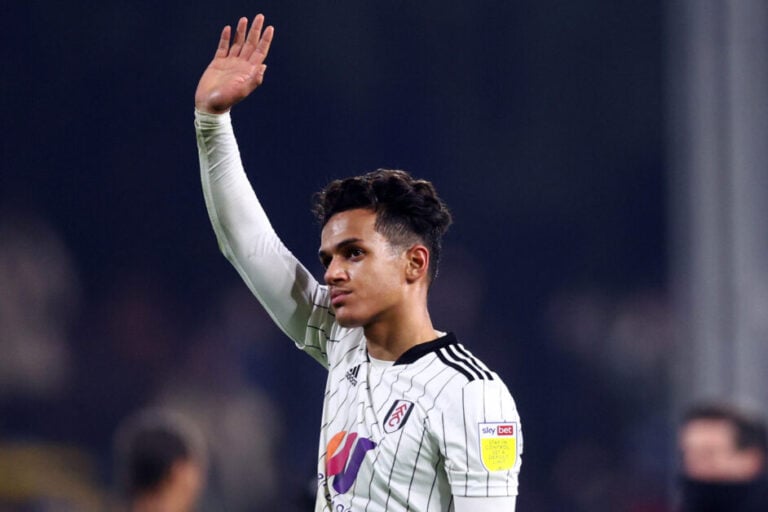 Championship leaders Fulham have a history of developing diamonds from their youth system – and young winger Fabio Carvalho is another fine example.

The Cottagers, who brought through Ryan Sessegnon before selling him to Tottenham Hotspur for £25 million, now have another major talent on their books.

That is because Carvalho has been impressing many with his performances in England’s second tier this season. The winger, who was born in Portugal but represents England at youth level, has seven goals and two assists in just 16 appearances. He scored twice and provided an assist in Fulham’s 6-2 victory over Birmingham City on January 18.

The 19-year-old made four appearances in the Premier League last term, scoring on his debut, but this has been his breakout season. A prolific scorer at the youth level, Carvalho has made the step up to the senior team with ease. So much so that the big clubs are circling.

‘Aura’ comparisons to Ronaldo and Messi

High expectations have been placed on Fabio Carvalho since a young age.

Speaking to talkSPORT, his former youth coach Greg Crutwell explained how the fleet-footed winger compares to Cristiano Ronaldo and Lionel Messi in one key area.

Discussing whether he could win the Ballon d’Or in the future, Crutwell said: “As long as he stays lucky with injury, the world is his oyster. He definitely has the X factor.

“What you also need, and I’m sure Ronaldo, Lionel Messi and Kylian Mbappe all have it, but when you meet Fabio, he lights up a room. His smile lights up a room. He comes in and shakes your hand, and you think there’s something about him, he has an aura. I’ve worked with a lot of good players, but he’s just got that X factor and that little something.”

When it comes to Carvalho’s seven goals, only 15 other Championship players have struck more this season. However, all of those players have made more league appearances.

But the English winger’s vital statistic is his key passes. As per WhoScored, he ranks within the top 20 for all Championship players in this metric, completing an average of 2.1 key passes per 90 minutes.

He ranks second amongst his team-mates, with only former Liverpool midfielder Harry Wilson (2.4) ahead of him. The majority of his key passes are short (1.4), which could make him perfect for a team with a possession-based style of play.

Carvalho also ranks well for successful dribbles, completing an average of 1.2 per 90 minutes. That is bettered only by team-mate Neeskens Kebano when considering players who have made five or more appearances.

The contract dispute that could dictate a move

Despite his superb start to life as a first-team regular at Craven Cottage, Fabio Carvalho hasn’t yet committed to a new contract with Fulham.

In November, the youngster turned down the offer of a new deal. With his current contract expiring this summer, the developments are understandably being watched by several big clubs. Leeds and Southampton are amongst those who have been credited with interest in the player.

According to Football Insider, Liverpool are planning to sign Carvalho on a free transfer this summer when his existing deal expires.

The apparent balancing act for the 19-year-old will be whether to stay at a club that will likely be in the Premier League next season, and play regularly, or take his chances with Jurgen Klopp‘s side. As per the Daily Express, Fulham boss Marco Silva has urged Carvalho not to move too soon.

The Reds and Fulham do have previous when it comes to signing players out of contract. Liverpool swooped to secure the signature of Harvey Elliott back in 2019, when the midfielder was just 16. They were eventually forced to pay the Cottagers a record compensation fee for a 16-year-old. It was reported by Sky Sports to be in the region of £4 million.