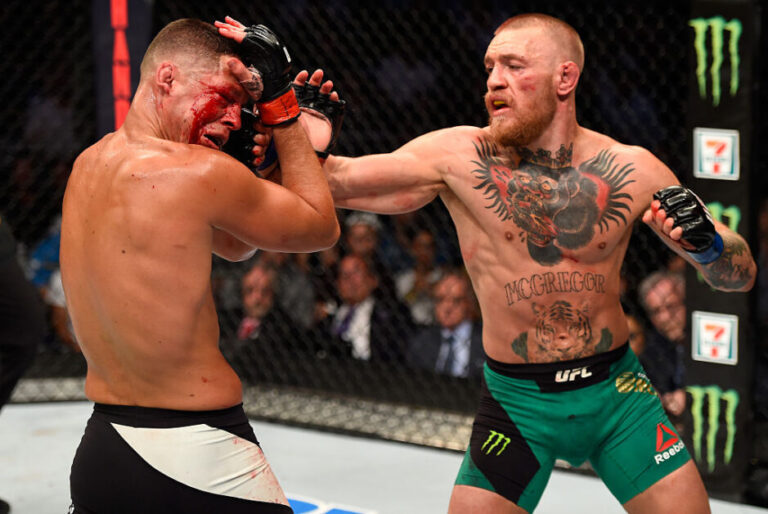 Dana White has refused to rule out a potential trilogy bout between Conor McGregor and his biggest rival, Nate Diaz.

The American, however, is currently involved in another battle, with the hype for his fight against Dustin Poirier having gone through the roof in recent weeks. The pair of elite fighters have engaged in a heated Twitter war, leaving fans desperate to find out who could back up their boasts in the cage.

On January 19, Diaz directed his anger towards his own company. They’re yet to get the fight over the line, and the popular fighter wants it now.

He said: “UFC stop playing with me. Consider this my signature to fight this f*****r. Quit slowing down the real fight game – it’s time.”

We haven’t seen much of the cult figure over the last few years. After his previous fight with McGregor, his worth has rocketed, which caused pay disputes with the UFC. However, he has reportedly signed a new contract recently, meaning that this could be about to change.

The 36-year-old has lost six of his last ten fights, but that hasn’t halted his drawing power. He’s still a massive star, and even if he loses a potential fight to Poirier, he’d still have the same support in his next outing.

A potential future fight could be yet another showdown with McGregor. Of course, the pair have plenty of history, having headlined two major UFC events in 2016. Having shared a loss and a defeat each, a trilogy fight would close the chapter on one of the UFC’s biggest rivalries.

White is aware of this and has admitted that there might be another chapter in the McGregor and Diaz story yet.

In an interview for ESPN with Brett Okamoto, the UFC president refuted the idea that the trilogy bout is a done deal. But he also didn’t outright deny the possibility.

Responding to a question on whether a fight with McGregor could be included in Diaz’s contract, he replied: “It could be. I think Conor will be back in summer. But I don’t know for sure. It depends on how his leg heals.

“There are a million things that could happen between now and then. To even speculate is stupid. I’ve stopped doing that.

“When McGregor contacts me and tells me he’s ready to start training 100%, then we’ll start talking about what’s possible for Conor.”

The McGregor-Diaz rivalry is one of the greatest in the history of MMA. The two icons not only captivated fans in the build-up to their fights, but they also delivered in the cage as well.

However, the grudge hasn’t been settled. The two fighters are still level, and there’s just one way to determine the score. They must collide again, and the fans can’t wait.