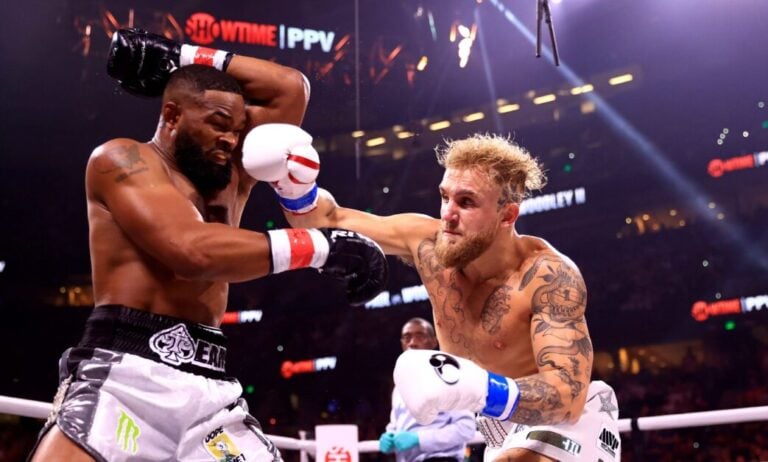 Tyron Woodley has fiercely rejected accusations from some fans that his fight against Jake Paul was ‘fixed’.

On December 18, ‘The Chosen One’ stepped in at two weeks’ notice to save what was a festive boxing show. But his Christmas couldn’t have ended up being much worse. He was rendered unconscious in the sixth round following a thunderous right hand.

Paul was awarded ESPN’s Knockout of the Year because the fight-ending punch was so impressive.

Although fans don’t like it, the ex-Disney presenter is rapidly taking over the sport. Since his stunning victory, the rumour mill has begun spinning rapidly with potential future opponents.

The 24-year-old has been linked to former world champion Julio Cesar Chavez Jr and Love Island’s Tommy Fury. But in a shocking turn of events, he could secure a bout with a far bigger name – Mike Tyson.

It was reported that the pair were in talks over what would surely be a money-spinning showdown. But Tyson rubbished the claims on Twitter, saying that he had never discussed the matter with Paul.

Either way, some fans do not believe Paul deserves these chances. And not just because of his ability.

The idea that a YouTuber could finish a former world champion is almost unbelievable.

Some fans couldn’t accept it. Following the contest, they made several accusations that the fight was fixed. This was based on Paul supposedly making a hand gesture shortly before landing the knockout blow.

Of course, there’s no proof behind any of these unfounded allegations. And Woodley flat out denied the claims whilst speaking on The MMA Hour.

“People f*** with realness and being authentic, I beat guys who were always on top, and they thought I was going to lose no matter what people fought me. It is a tough sport. There is only so long you can stay at the top.

“We didn’t plan who won and lost, but we promote a fight with press conferences that come up, and it was a huge show, one of the biggest in 2021.”

The 39-year-old has dealt with the loss remarkably well, all things considered. Before the Paul bout, he was in talks for a boxing match with MMA star Dan Hardy. This rivalry has become very personal. So if Woodley wants to redeem himself to the public, this could be the way to do it.