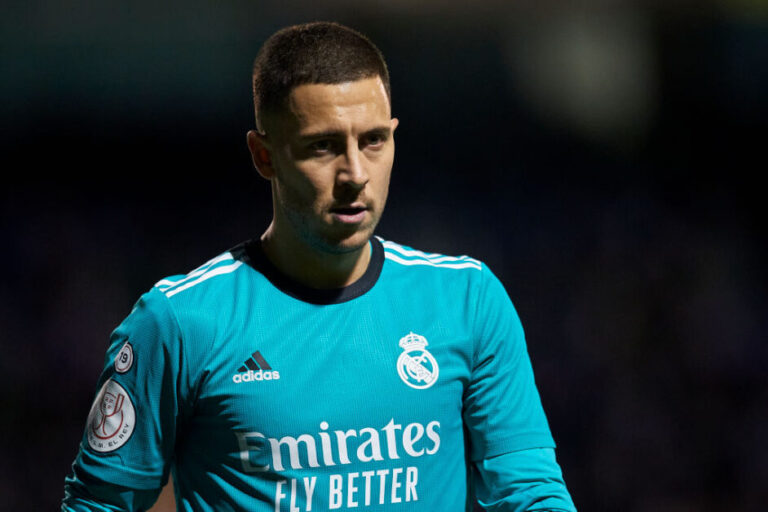 Eden Hazard could potentially depart from Real Madrid in this January transfer window, and there’s no shortage of teams vying for his signature.

The Belgian has fallen out of favour at the Bernabeu following a substantial drop in form. He has suffered horrifically with injuries, and this season he is yet to bag a single goal in his 15 appearances.

According to the Daily Mail, Real are more than happy to let the winger go ahead of the anticipated arrival of Kylian Mbappe this summer. With Vinicius Junior, Karim Benzema and Rodrygo in forward positions, the Belgian is clearly deemed surplus to requirements.

When Hazard signed for the Spanish club for £88 million in 2019, he was expected to set La Liga alight. But things just haven’t worked out. With the January transfer window now very much open, let’s take a look at four clubs who have been linked with securing Hazard’s signature:

As per El Nacional, Real Madrid have accepted a much lower fee of £33.4 million for Hazard from Newcastle.

The Magpies are desperate to avoid relegation this season. And one way to prevent that is to bring a player of Hazard’s quality.

The English club have become the wealthiest team in world football – and are looking to spend their newly-found riches in order to secure Premier League survival. But that still isn’t enough to peak Hazard’s interest. Whether they come in with improved terms remains to be seen.

Hazard has reportedly turned down an opportunity to head to the North East in favour of potentially securing a deal at a bigger club, if he is to leave Real Madrid at all. This could be the perfect scenario for Chelsea.

They have longed to bring back their former star since he departed from Stamford Bridge in 2019.

During his time with the Blues, he hit the back of the net on 110 occasions and provided 92 assists between 2012 and 2019. If Hazard wants to return to his best, heading back to a ground where the fans adore him could give him all the confidence he needs.

As per AS, Hazard could potentially be en route to Merseyside in the near future. Although his wages could prove an issue, Everton would be more than willing to match Madrid’s asking price.

The supremely skilled winger has a wonderful relationship with his international head coach Roberto Martinez. And with the Spaniard rumoured to take over at Everton, he could potentially bring Hazard to the Toffees with him.

The only stumbling block could be the position of Everton in the table – and the fact that they don’t currently have a manager. The Toffees sacked Rafael Benitez earlier in January, and are 16th in the table – just six points above the drop zone. Any argument of a long-term project cannot currently be put in the same category as Newcastle.

He graduated from the club’s youth system and made his first-team debut in 2007. The Belgian scored 36 goals in 147 Ligue 1 appearances for the French side, eventually earning a move to Chelsea in the summer of 2012.

In December, Marca reported that they were keen on bringing their former player back to the club.

Hazard’s career is in desperate need of revitalisation. Last season, Lille secured an incredible Ligue 1 victory but are struggling in 10th place this term. A move to the Stadue Pierre Mauroy could be the perfect transfer in order for Eden Hazard to become a world-renowned force once again.