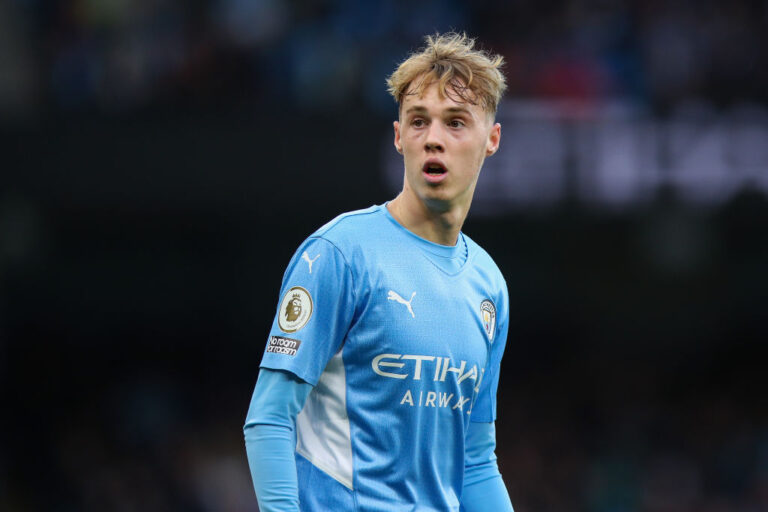 Premier League leaders Manchester City have had a fantastic start to the season. With the year coming to a close, we’re looking at which City youngsters could break into the squad in 2022.

These are the five players that we believe will have an exhilarating end to this campaign – and potentially be even better next season:

The 6ft2 forward Cole Palmer has had a very promising start to his career so far. His incredible versatility to play in different midfield roles or as a striker was shown when he made his Premier League debut in a central role last month.

At just eight years old, he joined the club and has been developing his skills with ‘the Citizens ever since.

However, it isn’t just his talent that makes him an exciting prospect. It is also his leadership qualities. Palmer captained the England U18 side throughout the 2019/20 season, and his impressive displays warranted a call up to the England U21s.

He played his first game in a U21 European Championships qualifying match, in which his country defeated Kosovo 2-0. Palmer made a massive impact in the fixture, scoring a superb solo goal to impress the home fans.

Liam Delap, who joined City’s academy in 2019 from Derby County, has shown great ability and potential.

The 18-year-old made his first appearance at the Etihad during a 2-1 win against Bournemouth in the Carabao Cup in September 2020. He went on to score his first goal in the process. Following the match, Pep Guardiola sang his praises and confirmed that he would continue training with the first team.

Delap has also impressed at the international level. In 2016, he finished as the top scorer at the 2019 Mercedes-Benz Aegean Tournament for U16 international sides in Turkey.

Tommy Doyle, who is currently on loan at Hamburg, is an exciting prospect for the future.

Following his debut with the league leaders, the Mancunian travelled to Germany to help hone his craft. This seems to be working as the upcoming star has looked impressive at the Volksparkstadion.

In addition, the 20-year-old made his debut for England U21s in September, and he will hope that his first match will be the start of things to come.

Salfordian midfielder James McAtee is another one of the Manchester City youngsters who’s looking to make a name for himself.

In November 2020, McAtee found the back of the net in a 3-2 victory against Chelsea in the FA Youth Cup Final. Following this, he scored eight goals and bagged nine assists to help his side win the 2020–21 Professional U23 Development League.

The younger brother of Grimsby Town’s John McAtee possesses all the materials to carve out an exceptional career.

Jayden Braaf, currently on loan at Udinese, is impressing fans in Serie A.

The dynamic forward bagged his first goal for the club in a 4–2 win over Benevento on 25 April 2021.

In addition, Braaf has become an integral part of the Netherlands development system, having made multiple appearances for a wide variety of age categories. He has scored numerous goals in the process.

If the supremely talented footballer can continue to enhance his skills in one of Europe’s premier divisions, then he’ll fit right into the City first team when his loan spell ends.

Read: Five Chelsea youngsters who could have a big 2022

Where will these Manchester City youngsters go from here?

All of the players we have selected have proved to have a natural gift for the game. However, they will not all be guaranteed to play at the highest level.

Those currently with the club need to work their hearts out to make the first team. Meanwhile, those on loan at home or abroad need to make the most of their time if they want to stay at the club or compete for playing time when they return to the Etihad.

These Manchester City youngsters clearly have the talent, but now they must prove to Pep Guardiola that they have the minerals as well.