Eintracht Frankfurt’s Andre Silva has responded to rumours linking him with a move away from the club.

Silva, 25, has been at the heart of mounting speculation surrounding his future. Manchester United have been heavily rumoured to be interested in the striker, as have Atletico Madrid.

Silva only jointed Frankfurt on a permanent deal last year after a strong loan move away from AC Milan. Ever since then, he’s built up a reputation for himself as one of the Bundesliga’s finest, second to only Robert Lewandowski in the scoring charts.

During a recent chat with O Jogo, Silva was happy to address the rumour mill. 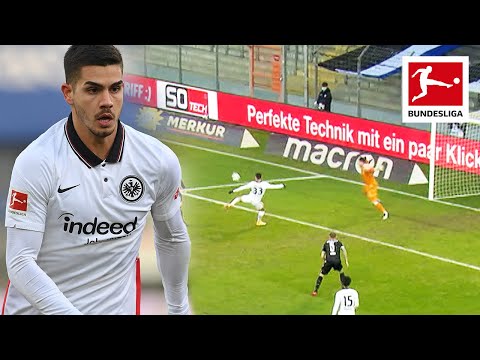 “I’ve heard rumours, but that is it. Rumours are rumours. At the end of this season, it’s something that gives me more motivation to work, it’s a sign that what I have accomplished has borne fruit and the path has been good.”

At the core of that response is a man who knows where his priorities lie. Eintracht Frankfurt have employed him to do the business up top and that’s exactly what he’s doing right now.

Frankfurt are currently sat in fourth place, 10 points behind Bayern Munich in the table. However on an individual level, Silva is earning himself plenty of plaudits.

With a number of high profile clubs on the lookout for a striker, there’s no doubt the Portuguese forward will be on plenty of radars come the summer.