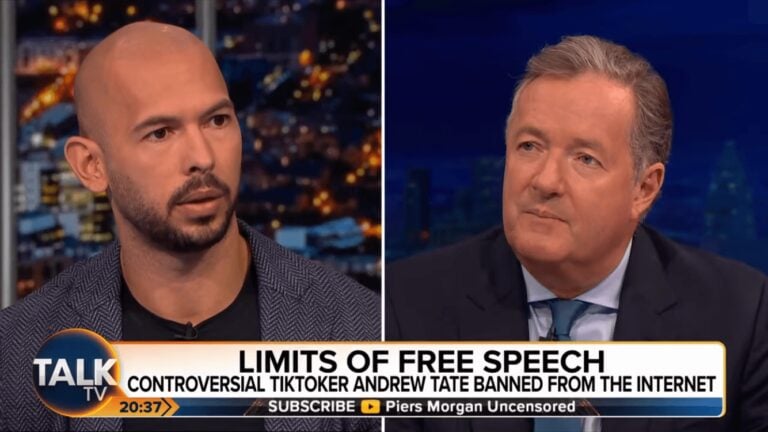 On October 5, two of the most controversial men on the planet went to war as Andrew Tate and Piers Morgan sat down for a one-on-one conversation.

A few months ago, outside of the kickboxing community, few people had heard of the self-proclaimed ‘Top G’. However, due to the circulation of his contentious videos, he’s become one of the most famous men on the planet.

Through the affiliate link on his ‘Hustlers University’ website, his loyal followers have shared hundreds of videos of the 35-year-old expressing his opinions on a variety of different subjects. And while some have praised his views on hard work and dedication, others have deemed his comments on women as ‘deeply sexist’ and ‘extremely dangerous for young and impressionable minds who may develop ‘toxic tendencies’ from applying his advice.

Due to the public backlash, Instagram and YouTube banned him from their platforms. But this hasn’t slowed down his growing cult status. The professional fighter is now targeting a boxing bout with social media icon, Logan Paul.

The pair have reportedly entered negotiations for a potential match-up in 2023. Despite never competing in boxing before, Tate achieved a great deal in his kickboxing career. The American-born influencer didn’t ever compete in Glory or K1, but he did win three ISKA Championships and an Enfusion Title.

However, it’s his antagonising views that are really keeping him in the spotlight.

The TV host welcomed ‘King Cobra’ onto ‘Uncensored with Piers Morgan’ to discuss some of his comments. In particular, the Brit asked Tate about his claims that he finds women aged 18 or 19 more attractive than women over 25.

Morgan stated: “That is misogyny.”

After Tate asked “why?” the former GMB star said: “Because you are encouraging a mindset about 25-year-old women that makes them sound to be infinitely less desirable than 18/19-year-olds and having effectively too much sex to be taken in a more respectful way.”

Tate responded: “Firstly, even if that was the case that wouldn’t be misogyny. That’s not misogyny because that’s not anti-women, I’m not saying that an 18 or 19-year-old woman would be more desirable.

“Anti-25-year-old women, we can argue, but not misogyny.”

But when Piers fired back: ‘Being anti any woman at all is misogyny,” Tate argued: “Not when I’m saying women are beautiful and attractive at a certain age… Ageist perhaps, but misogynistic absolutely not.”

When Morgan argued that Tate had admitted to sexism, the businessman fired back: “No, I didn’t, you said it was misogyny, I’m telling you no it’s not.”

The former Britain’s Got Talented judge then commented: “If a 26-year-old woman is watching this and has heard those comments, would you just say to her, ‘Look, I’m sorry, I shouldn’t have said that?”

“They have to wear full Burkas. They’re not allowed to drive cars. Is that the kind of world for a woman that you was born in?”

Tate countered: “I don’t live in a country where that happens. I don’t think it’s fine.

“You need to understand why my content existed in the first place. My content existed because I tried my very hardest to be an absolute and utter realist, especially with uncomfortable truths.”