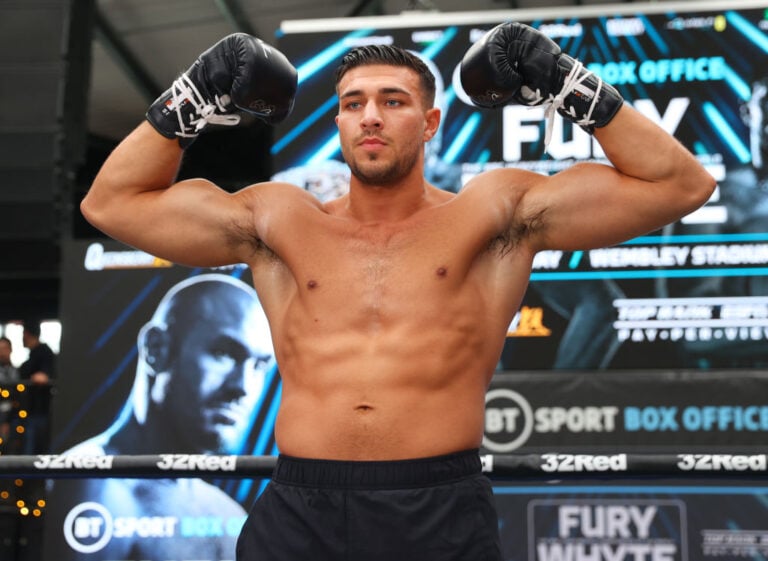 After missing out on his shot against Jake Paul, Tommy Fury will make his eagerly-anticipated return to the ring on November 13.

However, it’s not against the opponent fans would have hoped for. In December last year, the brother of the WBC World Heavyweight Champion pulled out of his contest against the world’s most controversial boxer, and since then, his career has taken a downwards spiral.

Despite a resurgent performance against Daniel Bocianski at Wembley Stadium, he’s struggled to secure a big fight. The Salfordian managed to rearrange his bout with Paul for August 13 at Madison Square Garden. But due to a declined ESTA, the United States government refused to let the 23-year-old into the country.

This unfortunate event resulted in the cancellation of the contest. In addition, the fans began to accuse the Brit of ducking the fight, which under the circumstances felt a tad unfair. Regardless, he’s desperate to secure the biggest names possible and looked set for a cracker on one of the most significant bills of the year.

Fury will officially return as the co-main event of Floyd Mayweather’s exhibition bout against YouTube star Deji. And prior to the announcement of his next outing, boxing enthusiasts had one man they wanted to see in the opposite corner.

Last month, The Daily Mail reported that the Love Island runner-up was set for a collision with Tyron Woodley. Not only would the former UFC Champion have given the prospect a stern test, but it would’ve also been an opportunity to see exactly where he stands compared to Paul.

Who will Tommy Fury fight next?

The reality TV star will fly out to the COCA-COLA Arena in Dubai to take on American light heavyweight, Paul Bamba. The former Marine turned professional in 2021 and has compiled a record of 5-2 (4). But while this looks reasonable on paper, his two defeats came against boxers with records of 0-4 and 1-4, respectively.

Therefore despite his undeniable toughness, Fury should secure a fairly simple victory. Consequently, the fans are extremely underwhelmed by the bout. However, they might soon have something to cheer about.

According to The Daily Star, the rising star has reached an agreement with Paul to reschedule their fight. However, this time, Fury will have home advantage. The Cleveland-born YouTuber will reportedly travel to the UK in February to give the fans one of the biggest fights of 2023.

But first, he’ll have to get past MMA legend, Anderson Silva, on October 29. And ‘The Spider’ is convinced he’ll ruin the party.