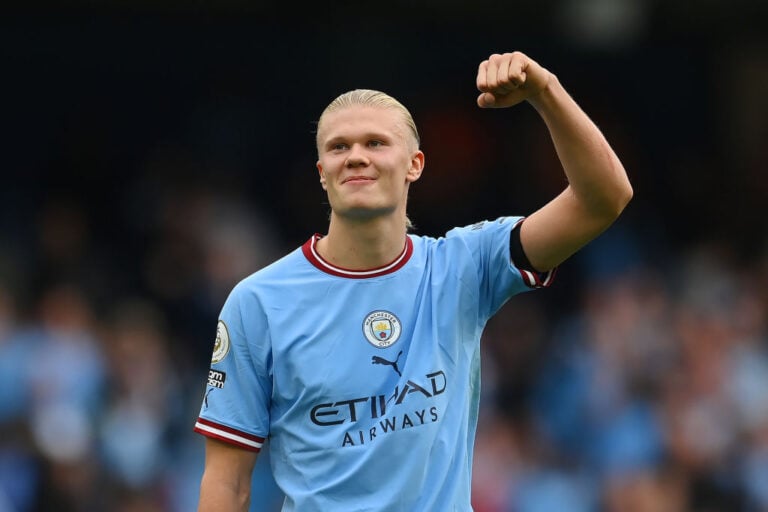 Erling Haaland has looked sensational since making his move to The Etihad, and if his goal tally is anything to go by, he’s got much more to come.

The Norwegian powerhouse arrived at Manchester City on June 13 and has taken the Premier League by storm. Despite being a mere 22-years-old, Haaland has the footballing IQ of a player far beyond his years. With outrageous strength, a ferocious work rate and an unmatched eye for goal, the attacking midfielder has adapted to the English game and proved himself as one of the best players on the planet.

The youngster, who’s left defenders terrified, and has already scored a whopping 17 goals in just 11 appearances, produced a masterful performance on Sunday. While the Manchester derby leaves many an inexperienced footballer quaking in their boots, Haaland rose to the occasion.

He sent the home crowd into raptures as he bagged another hat-trick and consequently cemented yet another incredible record.

Erling Haaland responds to fan pleading with him to join Man United (sporf.com)

The 6 ft 5 giant has reached a century of total games throughout his time in The Bundesliga and The Premier League. Haaland currently averages more than a goal a game, having hit the back of the net an incredible 103 times.

This sensational figure doubles Kylian Mbappe’s total of 48. In addition, it completely dwarfs legends like Lionel Messi and Cristiano Ronaldo, who have 41 and 16, respectively. In fact, the only two players who come close are Romario and Ronaldo, with overall totals of 90 and 86.

The rising star is set to beat the Premier League’s goal-scoring record for a single season by January, a feat which would blow fans and pundits away.