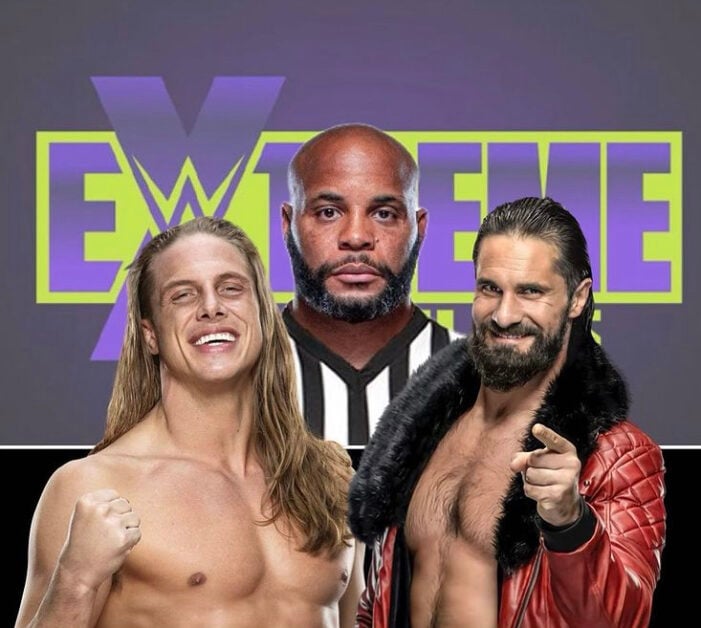 The lifelong wrestling fan has dreamed of starring in the world’s premier promotion. And on October 8, he’ll get his chance. The PPV event goes down at The Wells Fargo Center in Philadelphia, Pennsylvania, and will feature a plethora of intriguing match-ups.

In the main event, Ronda Rousey will challenge Liv Morgan for the WWE SmackDown Women’s Championship. Furthermore, sporting icon, Edge, will write the latest chapter of his rivalry with Finn Balor in an ‘I-Quit’ match.

But the biggest grudge match comes in the form of Rollins vs Riddle, who will go to war in a ‘Fight Pit’ contest. The two men have spent the last few months at each other’s throats, and at Extreme Rules, they will look to settle their beef once and for all. However, as tough as these warriors are, they’ll have to be on their best behaviour, as the man in between them can definitely fight as well.

To get the wrestling community hyped for his appearance, the former Olympian interrupted an argument between Rollins and Riddle during Raw.

He appeared on the big screen and had a lot to say: “We have had to watch you two whine, argue and complain for months, and we’ve had enough. Your behaviour has been insane, and we’re tired of the foolishness. From parking lots to arenas, you two have fought all around the world. And for all the people looking going, ‘Who is this guy?’ I’m Daniel Cormier. I’m one of the greatest UFC fighters of all time. I am the double champion.”

The 43-year-old continued: “Matt, listen, bro. We go way back. You’re a former UFC fighter, and I respect that. You’re a part of the fraternity. Seth, you know that from afar, I’ve always admired you. I was there in Santa Clara when you won that first world championship, and I may have celebrated. But as the whole world is fed up, I too am fed up.

“Someone told me that you two are competing in a Fight Pit match this Saturday at Extreme Rules. Well, I’m into that. That’s my world. I live in the cage. I love it. One thing I do know, is there has to be a stern third man. It can’t be any old referee. So you know who they called? They called your boy DC to come down and lay down the law, and make sure that only one of you walk out of the Fight Pit victorious. And we put an end to this. That’s exactly what I plan to do. So now, it’s time to stop yappin’, train hard, train smart, and I’ll see both of you boys this Saturday in Philadelphia.”

Could Daniel Cormier vs Brock Lesnar go toe-to-toe in WWE?

Throughout his UFC career, Cormier cemented himself as one of the biggest stars in the sport. The MMA icon knew exactly how to use his trash-talking ability to sell a fight. Therefore, a switch to WWE should come easily to him. Consequently, providing his referee appearance goes well, we could see him make huge waves in the wrestling world.

Back in 2020, Cormier nearly came to blows with Brock Lesnar after defeating Stipe Miocic for the UFC Heavyweight World Title. However, despite the organisation trying to make the fight, the battle of the legends failed to materialise. But now they’re both retired from MMA, fans are hopeful that the pair will settle their beef in the wrestling ring.