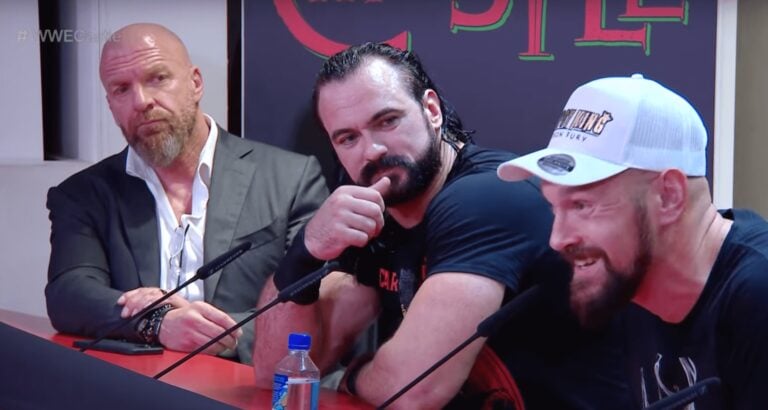 Although Tyson Fury looks set for a mega-money match-up with Anthony Joshua, Triple H hasn’t stopped trying to get him to join WWE.

On September 3, ‘The Gypsy King’ set Cardiff alight with his appearance at Clash at the Castle. The WBC World Champion sat ringside during the main event between Roman Reigns and Drew McIntyre. But when Austin Theory attempted to cash in the Money in the Bank briefcase, the giant rose from his seat and knocked the heel out cold.

The spectacular moment saw the 62,000 fans inside the Principality Stadium rise to their feet and cheer in delight. Of course, this isn’t the first time the boxer has captivated a WWE crowd. Back in 2019, he set the world alight with his rivalry with Braun Strowman.

The pair initially clashed during the 20th anniversary of SmackDown before having to be split apart by half the locker room on Raw the following week. Eventually, they settled their differences at the Crown Jewel PPV, with Fury coming out on top.

But while he’s set his sights on a return to the squared circle against AJ, ‘The Game’ hasn’t given up hope of swaying the heavyweight back over to the world of wrestling.

During an interview with Sporting News, the new Head of Creative claimed that Fury has the potential to do something special with WWE.

“We were just together in Cardiff. We had a long talk about it. He’s as enamoured as ever in wanting to do this with us. I think he knows he’s got a few big fights left in him in the boxing world. I think he’s going to capitalise on those fights as you are hearing.

“Selfishly, I want him to come work with us. Also, selfishly, I want to see those fights. I hope he knocks those out, and I hope he stays interested because I do think with the dedication and the drive he has that he could do something special with us as well.”