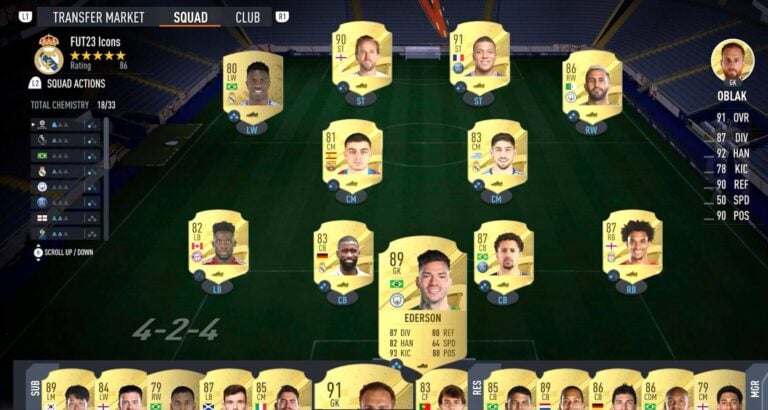 Among many new features in FIFA 23, the chemistry system in FUT had a total overhaul – so, here it is explained for those getting started on the Web App.

EA Sports released the Web App for Ultimate Team on Wednesday. The Companion smartphone app will then follow on Thursday. The early access allows gamers to open packs, buy and sell players on the market, and complete some SBCs.

Therefore, many users have already put the new chemistry system to the test whilst trying to complete the squad builder challenges.

This year, you do not build up chemistry through positional links up to a 100 rating. FIFA 23 has done away with links via placement on the pitch, meaning that your GK and ST can technically boost each other’s chem.

And, instead of 100, there is a maximum of three “star” chemistry ratings for each player, meaning the max team chem adds up to 33.

But how do you reach this number?

Firstly, to get a player on chem, they must be in the exact position on their card. So, unfortunately, an ST has to be at ST. This is unlike previous FIFAs, where you could put a player in nearly the correct position, e.g. CF at ST.

Then, to add chem stars/points, you create links with other players. Gamers can achieve this via club, nationality, or league links.

As it only needs one total chem point, though, just one of your players needs to be in the correct position.

Another method with which to gain one chem star is via nationality. If you have two players from the same country, they will both get a chem point. The “single-nation chemistry” SBC exemplifies this. It gives you a bronze pack when you submit two players of the same nationality.

Finally, players can build chemistry via being in the same league. However, unlike club and nationality, you will need three cards from the same league to gain one chem point for each.

Furthermore, the “single-league chemistry” SBC asks for three players from the same league. But, like the other SBCs, the squad needs one chem point. Therefore, only one player needs to be in the correct position.

Completing the squad-builder challenges helps you accumulate packs with which you can build your team. How will you get players to three stars, though?

(Thirty) three is the magic number

Getting to two and three chemistry points is achieved via the same club/nation/league route as earning one. If you decide to do it by club, this will need four total cards for two chem points. Then, seven total will get three.

For example, with Kylian Mbappe at striker, you would need three of his PSG teammates to get him on two stars. Then, to reach three via solely club, your team would have to possess seven PSG players, including Mbappe.

Alternatively, via nationality, you will require five players from the same country. FUT managers will need eight cards in their squad to max out players’ chem via nation.

Finally, five cards from the same league would earn two points on each card. Eight players from the same division earn the maximum three points each.

All players need to be on three chemistry stars to achieve the full 33.

As a result, you can use any combination of the thresholds to get your player to max chemistry. For instance, if Mbappe has a teammate (two players from the same club, one chem point), plus four other players from Ligue 1(five total from the same league, two chem points), he will have three stars.

Alternatively, a card with five fellow players from the same country, plus three from the same league, would also get all three points. Although it appears complex, to begin with, the new system allows much more flexibility with squads.

You can also play around with it on the squad builder function on FUTBIN to further your understanding.