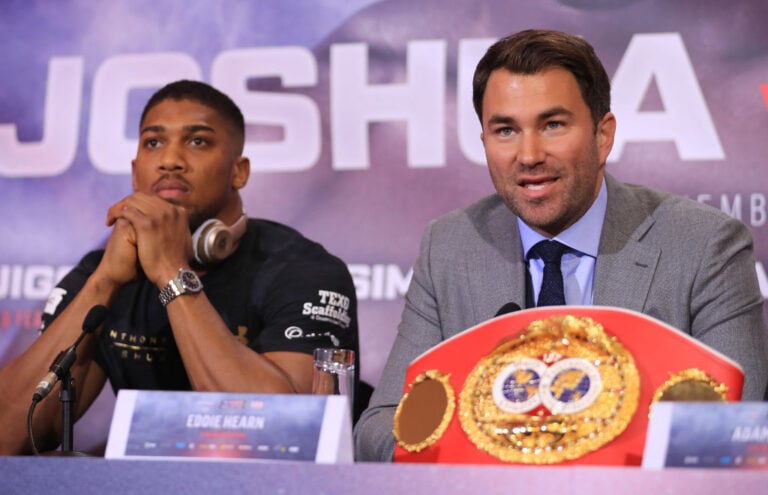 Eddie Hearn has promoted some of the biggest boxing bouts of the last decade. But which three stand out from the pack?

After being born into the Hearn family, and consequently the Matchroom business in 1979, the Dagenham boy was always destined to take on his father’s legacy. He arrived on the scene back in 2010, and teamed up with Audley Harrison for his fight with David Haye. However, it didn’t work out how he would have liked.

After building the event up as a super-fight, his man lost via third-round KO, meaning it wasn’t the perfect start for Hearn. However, he managed to build back up, and gradually became the biggest promoter on the planet.

He understood the younger generation, and connected with them as no-one else had before. He sold 80,000 tickets for Carl Froch vs George Groves and managed to make Anthony Joshua the biggest star in the sport.

Hearn still has plenty of his nights on the horizon including Chris Eubank Jr vs Conor Benn. But which match-ups does he look back on the most fondly?

During an appearance on The Residency Podcast, the 43-year-old revealed the three events which he is most proud to have put on.

As per Boxing Social, he said: “Anthony Joshua against Wladimir Klitschko at Wembley – 90,000 people, that was incredible.”

He continued: “Tony Bellew, who’s now one of my best friends, we took him to Everton football club where he fought for the WBC world title and won! We called the show ‘The Real Life Rocky Story’ and it was just such an emotional night.

They are three of Hearn’s favourites, but there are plenty more highlights. There is a lot more left in the tank for the promoter, too, with a seismic fight between Tyson Fury and Anthony Joshua potentially on its way in the near future.