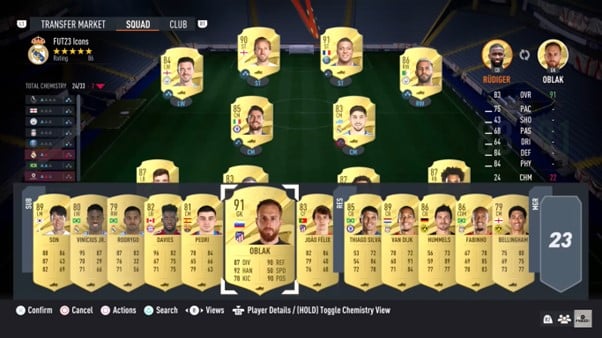 As Ultimate Team managers begin preparing their squads for the release of FIFA 23, here are some ideas for your starter teams that cost around just 50k coins.

Following the early release of the Web App, FUT players can begin the Ultimate Team grind ahead of the full game. Sadly, to play a game of FIFA, you must wait until September 27 or 30, depending on whether you have early access.

But that has not stopped people from completing SBCs and opening packs in order to build their starter teams. For many, trading on the transfer market and compiling squads is an enjoyable feature at the game’s start.

However, most gamers do not have millions of coins with which to buy players. So, here are some budget-friendly teams that cost around 50k on FIFA 23.

*All prices are correct from FUTBIN as of 23/9/2022. They are set to change, as the transfer market can fluctuate.

Firstly, our starter Serie A team makes use of pacy defenders and a balanced, hard-working midfield. The attack, whilst speedy, also contains the most expensive player in the team. AC Milan winger Rafael Leao will set you back around 14k coins.

This year, the German top flight looks like an underrated league with which to build a starter squad. The Bundesliga has a number of “cheap beasts” in FIFA 23, meaning teams that are under 50k should be easier to build.

One card that could fly under the radar is Konrad Laimer. Thanks to his pace, work rates, and stamina, the Austrian could be a monster CDM.

Unfortunately, La Liga suffers from a lack of cheap CB options. Therefore, you do have to fork out 15k for a decent defender in David Alaba. However, the midfield and attack leave you with many versatile options, so your in-game formation can vary.

PSG take up the majority of high-rated cards in the French top division. The likes of Mbappe and Neymar are very expensive, meaning you have to search for gems in the low-rated cards.

Even Renato Sanches, at 80 rated, currently sets you back 18k. Ligue 1 may be a better option to build a hybrid squad from – but you can still make a great XI out of the cards in the league.

This Premier League team benefits from having versatile players. For instance, Reece James can play in midfield, CB, or RB, thanks to his well-rounded stats.

Similarly, Phil Foden has a number of positions for his card. So, even if you chop and change formation, the Man City player is still easy to fit in. His great dribbling stats will make Foden an excellent player at the start of FIFA 23.