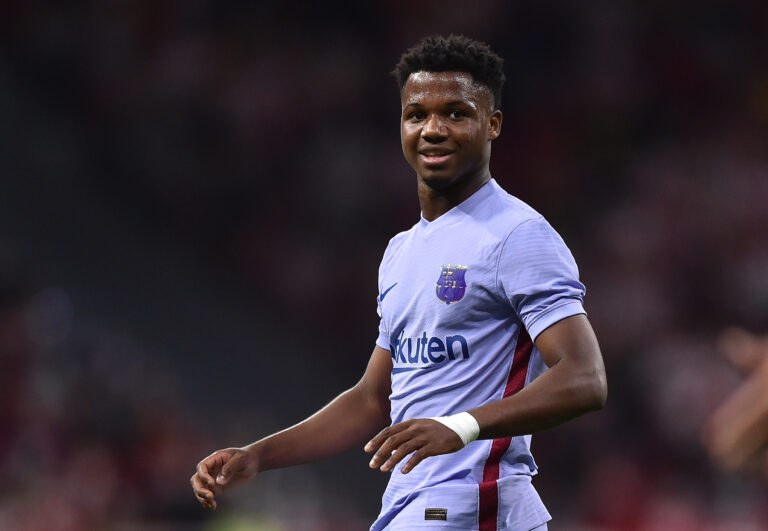 Barcelona winger Ansu Fati is reportedly close to signing a new contract at the Nou Camp.

The 18-year-old’s current deal expires this summer. That means that clubs outside of Spain can currently approach to sign him on a pre-contract agreement as early as January.

Fati, who this summer was given the number 10 shirt formerly worn by Lionel Messi, has impressed heavily during his short career to date.

He scored seven goals in 19 games in his debut season in 2019/20, as well as providing one assist. Last season, he scored four goals in seven appearances. Fati also made his debut for the Spanish national team.

The Spaniard has, however, missed most of the last 12 months through a serious knee injury. He suffered the injury back in November 2020.

Since returning last month, Fati has made three substitute appearances for Ronald Koeman‘s side. He scored on his first game back – a 3-0 win over Levante in LaLiga.

With Messi having left the club, and Antoine Griezmann also departing, Fati could be expected to play a major role in Barca’s attack in the upcoming months and years.

The contract signing, if it happens, will be a major boost for the Spanish giants, with positive news around the club few and far between recently.

Marca report that Fati’s agent, Jorge Mendes, is already in Barcelona. They also say that the club initiated contact over an extension “months ago”.

The deal would follow closely in the footsteps of fellow starlet Pedri’s contract extension. Upon announcing the news of Pedri’s new deal, Barcelona stated on their official website: “FC Barcelona and the player, Pedro Gonzalez ‘Pedri’, have agreed a contract extension up to 30 June 2026. The release clause is set at 1 billion euro.”

“The new contract ties down the player from the Canary Islands for the rest of this season and a further four years. The official signing will take place on Friday 15 October.”