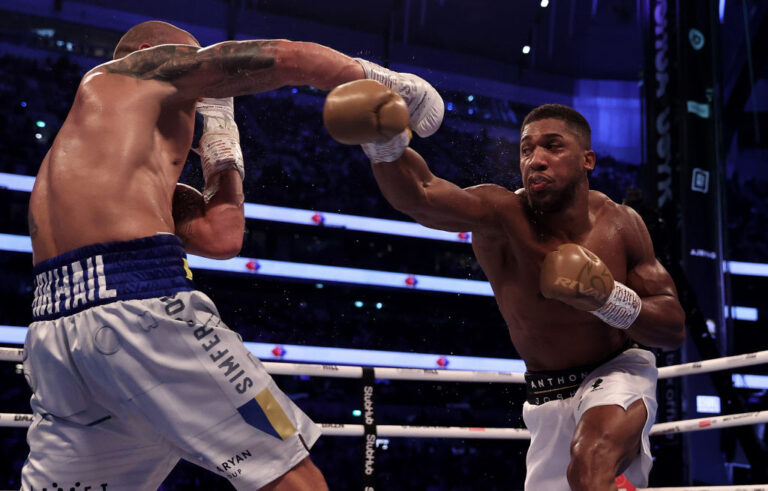 Anthony Joshua looks set to earn an insane amount of money from his rematch with Ukrainian fighter Oleksandr Usyk.

Having toppled Joshua in their first meeting, Usyk confirmed he would take on the British fighter in a rematch. Due to take place in the summer, anticipation is already building ahead of their fight.

With Saudi Arabia emerging as the frontrunner to host the bout, critics have labelled the move as ‘morally bankrupt.’ The Middle Eastern nation has been accused of using sport to distract from its domestic and foreign affairs policies.

Since 2015, Saudi Arabia has been waging war against neighbours Yemen; just last month, Amnesty International criticised the mass execution of 81 civilians. For Usyk, they are stories that may hit a little too close to home.

Having joined the Ukrainian military following Russia’s invasion of his homeland, Usyk only recently returned from the war zone. Unsurprisingly, there were doubts surrounding the Joshua rematch, but Usyk confirmed the fight would go ahead.

Despite a one-month delay due to Usyk’s military commitments, the fighters are now preparing for a June match-up. However, should the bout go ahead as planned in Saudi Arabia, the pair could be in for a bumper payday.

Bumper payday on the cards for Anthony Joshua in Usyk rematch

Joshua is no stranger to the big stage. After impressing on the amateur scene, the Hertfordshire native made a seamless transition to professional boxing in 2013.

A two-time former unified world heavyweight champion, Joshua only lost his title during the first fight with Usyk in September. Claiming a unanimous decision, the Ukrainian outmanoeuvred his British opponent to take a deserved win.

Now looking to avenge the defeat, Joshua is also in line for his most profitable payday as a professional boxer. According to the Daily Mail, the 32-year-old could pocket a rumoured £100 million from the rematch.

While the figure may decrease if the fight takes place outside of Saudi Arabia, it would currently stand alone as Joshua’s biggest earning in boxing. Reported to have taken home an eye-catching £66 million from his rematch with Andy Ruiz Jr., the Usyk figure dwarfs anything Joshua has earned before.

Similarly, the fight would also represent Usyk’s biggest payday, having previously maxed out with the original bout. Earning a reported £3 million from the first meeting with Joshua, the sequel is likely to put Usyk amongst boxing’s biggest earners.