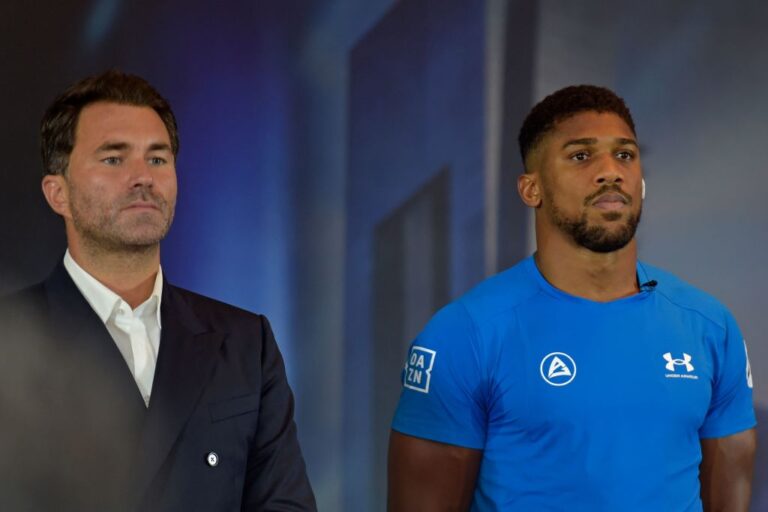 On September 5, Tyson Fury called out Anthony Joshua for one of the biggest fights in British history. And by the sounds of it, Eddie Hearn and Frank Warren both want to get it made.

After a jam-packed weekend at WWE Clash at the Castle, ‘The Gypsy King’ has switched his focus back to the ‘sweet science’.

Earlier this year, the 6ft 9in giant called time on his career following a statement victory over Dillian Whyte. But watching Oleksandr Usyk take his biggest rival to school has salivated his appetite to get back amongst the action.

Although AJ failed to reclaim his titles against his Ukrainian adversary, he still stands at the top of the mountain as far as commercial draws are concerned. Therefore, with Usyk out until next year, it looks like now is the time to pull the trigger on the bout fans have longed to see for the last six years.

In typical Fury form, he took to social media to release a video aimed at the former unified champion.

“I think you’ve all heard that I’m going to be fighting soon within the next few months, and I think that before I announce an opponent, I need to do this just in case.

“Anthony Joshua – I know you’ve just lost a fight to Usyk, and you’re beltless at the moment, and I’d like to give you an opportunity to fight me for the WBC Heavyweight Championship of the World and the lineal championship in the next few months.”

“You’re coming off a twelve-round fight, so you’re match-fit, you’re ready. I’m giving you a few months’ notice. If you’re interested, I’ll send you the date over, and we can rumble. A battle of Britain for the WBC Heavyweight Championship of the World.”

“Let me know if you’re interested. If not, I will select another opponent. Thank you very much, and goodnight. Boom.”

On paper, Fury’s challenge looked great. However, many were doubtful that it would actually lead to anything. But in a stunning turn of events, it’s looking like the fight we all want to see, could be on the horizon.

After the clip went viral, the recipient quickly responded.

As per Sky Sports, he said: “Yea calm,” Joshua posted. “I don’t do the online discussions just for clout, so if you’re really about it shout @258mgt.

“I’ll be ready in December.”

Eddie Hearn has revealed that he’d like the fight to take place just before Christmas. And Fury’s promoter, Frank Warren, claimed on talkSPORT that he’s ready to make an offer.

British boxing fans may now finally get to see the fight they have been waiting a long time for.