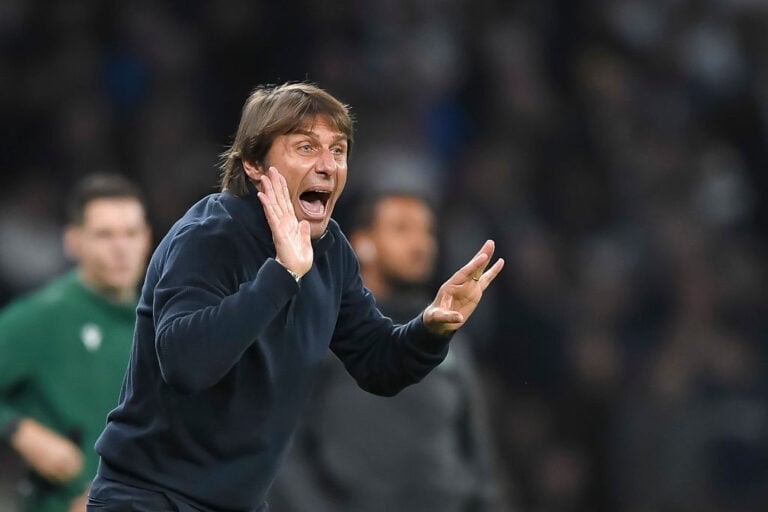 Antonio Conte could not hide his frustration at the VAR decision which cost his Spurs side a win in the Champions League last night, exiting his post-match presser prematurely.

Tottenham thought they had scored the match-winner – and qualified for the knockout stage – thanks to a Harry Kane strike. However, VAR intervened to rule out the goal for offside following a lengthy delay.

The North London side instead drew 1-1 with Sporting Lisbon in their UCL group stage encounter.

After seeing his side denied a victory, Conte let his feelings be known. He first addressed the red card that he received for his protests at the disallowed goal.

“All the people came onto the pitch and then the referee decided to send me off,” said the Italian via Sky Sports. “I think there are moments where you can understand you have just disallowed a regular goal because the ball is in front of Kane.”

Antonio Conte then questioned whether VAR would make such a decision against a “top” team, and branded the goal being chalked off “unfair”.

Following the outburst, Conte left his post-match press conference. He answered just one question, per The Express.

The controversial offside ruling covered a tricky area of the game – but was it the right decision?

The England captain thought he had sent Spurs through to the round of 16 with a first-time strike from close range. But VAR thought otherwise.

Following Emerson’s knockdown – intended for Kane – the ball deflected off a Sporting Lisbon defender. It still fell to Harry Kane, who then scored.

But the forward was fractionally ahead of the ball and second-last defender (the last being the keeper) as Emerson attempted to pass to him. Spurs’ protested that Emerson’s pass went backward. Unfortunately, this does not impact an offside decision.

And, as the opponent’s deflection was non-deliberate, this does not affect Kane’s offside status. The key is that Kane had a part of him that was ahead of both the ball and second-last opponent – per the FA rules, he is offside.

In the rest of the game, Tottenham may lament not taking their earlier chances.

The English forward gave the Portuguese side a first-half lead in a tense match. Edwards’ low-driven shot got the better of Lloris to put Spurs on the back foot.

Tottenham upped the pressure in the second half, calling Sporting keeper Antonio Adan into action on multiple occasions. They finally got an equaliser on 80 minutes thanks to a Rodrigo Bentancur header – but Spurs wanted more.

Spurs continued to create chances as they searched for the decisive goal. Then, in injury time, a deep Perisic cross found Emerson. The Brazilian’s nod-down went to Harry Kane, who tucked the ball home to send the home fans into a frenzy.

However, a three-minute VAR check ruled out the goal for offside. This VAR call drew furious reactions from Antonio Conte and the rest of the Spurs personnel. Fans in the stands then voiced their frustration, filling the Tottenham Hotspur Stadium with a chorus of boos.

The match ultimately finished in a draw, meaning that Spurs need a result at Marseille in matchday six in order to confirm their place in the knockout stage.