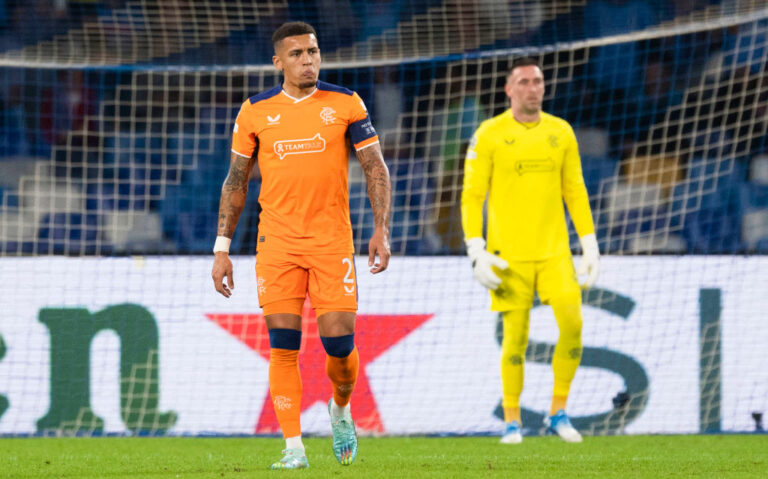 Rangers are on the brink of adding their name to the Champions League history books for all the wrong reasons after yet another defeat last night.

The Scottish Premier League side lost 3-0 to Serie A leaders Napoli in their UCL Group A encounter.

With the defeat, Rangers are still yet to score a point in this season’s competition – and have a woeful goal difference (GD) to go with it. As a result of some heavy defeats, the Glasgow club’s goal difference stands at -18. This is perilously close to the all-time worst GD of -19.

During the 2011/12 Champions League, Dinamo Zagreb “achieved” this historically woeful figure. They conceded 22 goals whilst only scoring three as they also finished their fixtures without earning a point. Unsurprisingly, the Croatian side finished bottom of their group that year.

Mercifully, Rangers do not have to worry about completing the group stage with scoring the fewest goals in UCL history. Zagreb, unfortunately, hold that record too. In 2016/17, they went an entire group stage campaign without finding the back of the net.

Maccabi Haifa also failed to score in the group stage back in the 2009/10 season. However, they only conceded eight goals, meaning their goal difference was a tolerable -8.

If Rangers lose by any margin in their final game against Ajax, they will join or beat that fateful 2011/12 Dinamo Zagreb team for the worst goal difference in a single campaign in Champions League history.

This unenviable record would seal an absolutely miserable outing in Europe for The Gers.

Giovanni van Bronckhorst’s side kicked off their European adventure with a humbling 4-0 defeat to Ajax in Amsterdam.

The situation then got worse as they lost 3-0 to Napoli at Ibrox. This was despite Allan McGregor saving two penalties that could have made the score even heavier.

Back-to-back matches against Liverpool did little to stem the flow of goals. Firstly, a 2-0 loss at Anfield suggested a small recovery. However, the Reds then battered Rangers 7-1 at Ibrox, with Mo Salah scoring the fastest hat-trick in the competition’s history.

Yesterday, Rangers made it five losses from five with a 3-0 defeat in Italy to the high-flying Napoli. They now need to get points from their final game – at home to Ajax – to avoid becoming the 21st occasion that a team has finished the group stage on zero points.

Amazingly, the Scottish club could actually qualify for the Europa League. This is nearly impossible, though, as Ajax’s goal difference is only -7. So, they would have to beat Ajax by a massive, rugby-like score line in order to snatch third place.

The Serie A leaders totally outclassed Rangers and continued their 100%-win record in this season’s UCL.

After just 20 minutes, Napoli found themselves 2-0 up and in control of the game. Giovanni Simeone had grabbed a double. The Argentine’s first was a smart finish following a clever through ball. Simeone then headed home a Mario Rui cross to bag a brace after 16 minutes.

Napoli maintained their grip on the game throughout the first half, with Tanguy Ndombele hitting the bar at one point, too.

Rangers, meanwhile, had a limited impact on the game, registering just one shot on target.

The Italian hosts wrapped up the game late on thanks to a Leo Ostigard header from a corner. As a result of the 3-0 victory, Napoli just need to avoid heavy defeat against Liverpool in order to secure first in Group A.

In contrast, the outlook is bleak for Rangers. But another suffering UCL side could spare their blushes…

A reprieve from entering the history books?

Czech side Viktoria Plzen are also experiencing an awful Champions League campaign. They have lost every game and sit on a goal difference of -17. But, unlike Rangers, they have scored more than once in this season’s competition.

Their final Group C fixture sees Plzen face Barcelona. Both teams are playing for pride, with the Catalan giants confirmed as third place in that group. But they may still hit a few past their Czech opponents on matchday six.

If Plzen lose by three goals or more, they will overtake Dinamo Zagreb for the worst-ever goal-difference record. So, maybe Rangers can avoid the history books by simply being not as bad as Viktoria Plzen. The Gers just need to make sure that if they lose, it is by fewer goals than Plzen lose.