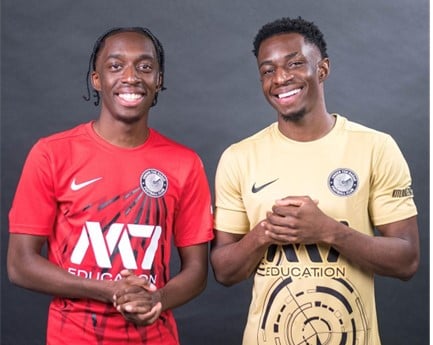 Internet personality and YouTuber Tobi “TBJZL” Brown has received an invite to train with Crawley Town – with a view to playing for the club.

In a statement on their website, the League 2 club revealed that Brown, alongside brothers Manny and Jed Brown, will be on trial with their first team on 1 November. If all goes well, Crawley could look to involve the trio in their upcoming FA Cup match on 5 November.

“We’re excited to have Tobi, Manny, and Jed joining us for training on Tuesday,” said Johnson via the club website. “And we’re looking forward to seeing what they can bring to the club. Depending on how they perform, we may extend offers to continue training with the lads on a trial basis and potentially compete for a spot on the bench for the Accrington Stanley match.

“It’s fairly unlikely they’d get on the pitch unless the game is well in hand,” Johnson added. “But we want to give them the opportunity to show Lewis and the staff what they can do in training. Then we can go from there.”

The move could work in the League 2 side’s favour, as the YouTubers have a massive following.

TBJZL to train with Crawley Town

TBJZL has 4.87 million subscribers on his personal YouTube channel alone, plus a massive following on his social media accounts. Additionally, he is a founding member of the Sidemen YouTube group, who boast 17.1 million subscribers.

Meanwhile, Tobi Brown’s brother, Manny, has his own YouTube channel that has 2.09 million followers. As a result, the online personalities’ involvement with Crawley could boost the club’s social media presence.

Despite the lucrative publicity, Crawley insist that they are still focused on football. They stated that the team remains fully committed to winning their first-round FA Cup tie against Accrington.

However, Crawley Town also mentioned that they look forward to the possibility of TBJZL and Co’s involvement in “introducing the club to millions of potential new supporters”.

This unique opportunity came about following a partnership between Crawley’s owners, WAGMI United, and the Sidemen YouTube channel.

Before September’s Sidemen Charity match, a massive friendly game featuring a number of YouTube and internet personalities, a unique announcement was made. Thanks to the partnership between WAGMI United and Sidemen, the YouTube football game would have scouts in attendance.

They would have had an entertaining afternoon, as it happens; the match finished 8-7 to the Sidemen, featuring some great goals. There was a varying level of talent on display, too.

But Tobi and Manny clearly stood out. The pair are very talented players, showcasing pace and attacking flair. For instance, TBJZL finished the game with a combined three goals and assists. Similarly, Manny had two goal contributions – with both reportedly impressing the scouts.

The brothers have also played a lot of football together for a team called Under the Radar FC, which Manny actually founded. The team currently plays in a regional league in London.

From what the scouts saw, they decided to throw the trio of brothers into training with a football league club to test them out. Whether any of the YouTube stars can break into the first team or not remains to be seen.