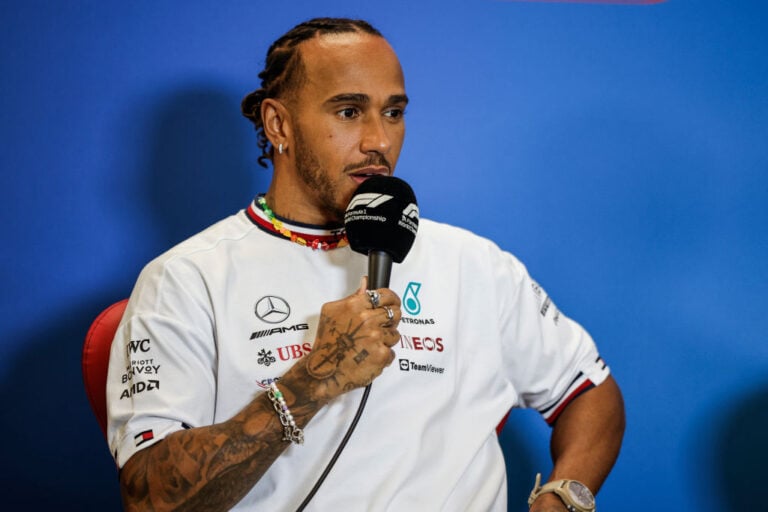 Seven-time F1 world champion Lewis Hamilton played down the chances of Mercedes winning a race in 2022 – but doesn’t expect that to affect his future plans.

The British racer just missed out on a Grand Prix victory yet again at the last round in Austin. Hamilton finished second, with Red Bull’s Max Verstappen overtaking him in the closing laps to take the victory.

This was the Mercedes ace’s third second-placed finish in 2022, showing how painfully close he has got to the top step of the podium. But Hamilton is unfortunately still winless this season.

As a result, his record as the only driver to win a race in every single season which they have driven in F1 is under threat. To make matters worse, Hamilton is pessimistic about the possibility of maintaining his incredible career streak.

“I think we need to be realistic,” said the Brit, via Sky Sports. “The Red Bull car has been the fastest all year by far, and it is still the fastest car.

“It was great to start third and be in a position to fight,” added Hamilton. “But on true pace, they were ahead of us today and they will be in the next three races. Unless something drastic happens to any more of them, it’s highly unlikely that we can compete with them.”

Despite his gloomy outlook on the 2022 season, Mercedes’ star driver still has plans to remain with the Silver Arrows in the upcoming campaigns.

Currently, Hamilton’s contract with Mercedes runs out at the end of the 2023 race season. But, in a recent interview with media, the seven-time champ revealed his intention of extending his career in F1.

“We are going to do another deal,” said Hamilton via Motorsport.com. “We’re going to sit down and discuss it in these next couple of months, I would say. My goal is to continue to be with Mercedes.

“I have been with them since I was 13, and it really is my family: Mercedes-Benz is my family.”

The F1 star then expressed gratitude at Mercedes’ unwavering support for him.

“I really believe in this brand,” he also added. “I believe in the people that are within the organisation. And I want to be the best teammate I can be to them. Because I think we can make the brand even better, more accessible, even stronger than it is. And I think I can be an integral part of that.

Away from his prospects for 2023 and beyond, Hamilton and Mercedes are preparing for this weekend’s Mexico Grand Prix.

The F1 circus descends on the Autodromo Hermanos Rodriguez for the popular Mexico Grand Prix later this week. Although both drivers’ and constructors’ championships are wrapped up, the battles for the minor positions are well and truly on.

Just two points separate second-place Charles Leclerc from Sergio Perez in third. Heading into his home race, Perez will want to put on a massive performance and leapfrog his rival in the process.

Meanwhile, in the constructors’ championship, an intense battle for fourth place puts millions of pounds in prize money at stake. Alpine (fourth, 144 points) have a slender gap over McLaren (fifth, 138 points) in the standings.

With just two rounds left after Mexico, the “best of the midfield” rank is truly up for grabs.