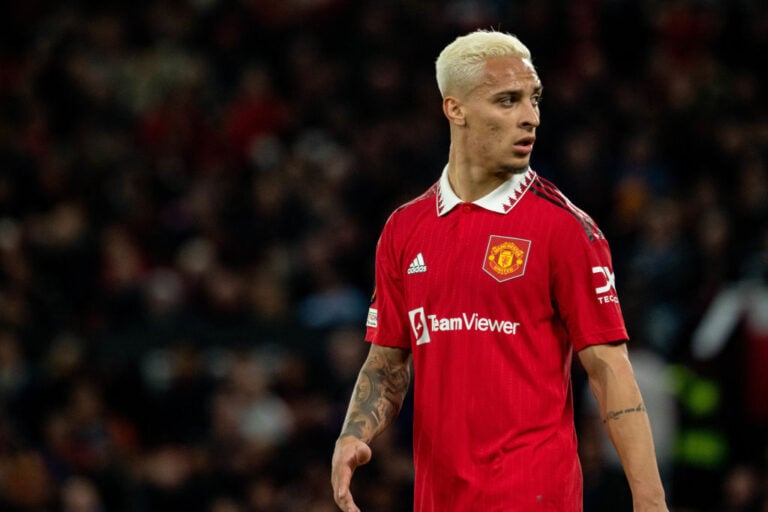 Man United boss Erik ten Hag says that he “doesn’t have a problem” with Antony showboating with his signature spin trick – provided that the move has a useful purpose.

The Brazilian winger came under fire from former pros for the outlandish skill during Man United’s 3-0 win over Sheriff Tiraspol in the Europa League.

With the score at 0-0 in the first half, Antony received the ball out on the right hand side. In a swift move as he controlled the ball, the Brazilian deftly spun in a circle twice, with the ball glued to his foot.

However, he overshadowed the impressive skill by butchering his attempted through-ball that followed. The pass instead sailed out of play for a goal kick.

After the match, Erik ten Hag shared his thoughts on Antony and his showboating.

“I don’t have a problem with tricks as long as they’re functional,” said the Man United boss, via BBC Sport. “When there is a trick like that, it’s nice as long as it’s functional. If you’re not losing the ball, then it’s okay. But if it’s a trick because of a trick, then I will correct him.

“I demand more from him [Antony] – more runs behind, more often in the box, and more playing in the pocket.”

Just minutes after the showboating – with the score at 1-0 to United – Ten Hag subbed off Antony during the half-time break. But the Dutchman confirmed that his player’s trick had nothing to do with the change.

“No. It was more or less planned if we were leading,” confirmed Ten Hag when asked about the substitution of Antony. “I wanted to see Marcus Rashford and Cristiano Ronaldo close together and the dynamic on the right side.”

So, overall, Antony’s boss does not seem to be too bothered by the use of his trademark skill. Meanwhile, former pros doing punditry were less than impressed.

Commentating during the game, Robbie Savage did not mince his words about Antony’s skill and the incomplete pass.

“That for me is ridiculous,” said Savage, via BT Sport’s Twitter. “He’s done that [spin] and then he puts the ball out of play. It’s quite embarrassing, actually.

“If I was the manager, I would not be happy.”

“I just don’t know what the skill achieves,” said Scholes, via Daily Mail. “I love a bit of showboating, but at least get the pass right.

Additionally, the former Red Devils midfielder said that the showboating needs “knocking out of” Antony.

Erik ten Hag’s side kept pace with Group E leaders Real Sociedad thanks to a 3-0 win over Sheriff at Old Trafford.

Throughout the match, the Red Devils completely overwhelmed the visiting team. United had 75% possession and 24 shots at goal. In contrast, Sheriff failed to register a shot at David de Gea’s goal.

Despite the dominance, it took nearly the whole first half for Man United to take the lead. Diogo Dalot grabbed the home side’s first goal with a header from a corner.

At the start of the second half, Erik ten Hag introduced Marcus Rashford, Harry Maguire, and Luke Shaw. And the manager’s substitutions paid off as Shaw and Rashford combined for United’s second goal.

Rashford met his teammate’s fizzed cross with a fine header, with the ball then flying into the back of the net to double United’s advantage.

Later on in the game, Cristiano Ronaldo got a much-needed goal, slamming home a rebound from his own saved header.

However, United need to win their last game against Real Sociedad by at least two goals in order to claim first place in the group.