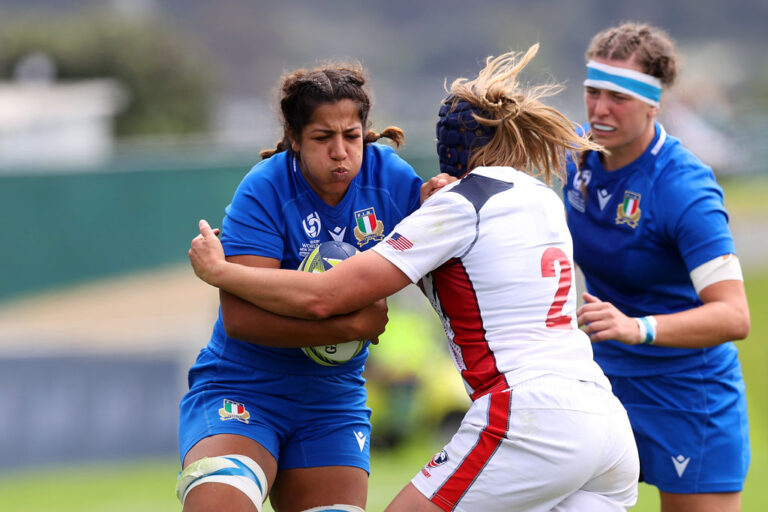 Italian second-row, Sara Tounesi has received a 12-match suspension after biting an opposing player at the Rugby World Cup 2021.

The shocking incident occurred during her country’s 21-8 victory over Japan.

In this pool B fixture, match officials did not address the bite during the game. However, the sport’s governing body did cite Tounesi for her bizarre actions post-match, handing her a lengthy ban.

The World Cup’s judicial committee then sustained this decision, meaning that Tounesi will miss the rest of the tournament.

“The committee concluded that the player bit a Japanese player, which merited a red card,” read a World Rugby statement (via ESPN).

The Italy lock does have two days to appeal the ruling, though.

Her suspension comes as a blow to an Italy side who are enjoying their best-ever run at a Women’s Rugby World Cup.

With their win over Japan, the Italians reached the last eight of a tournament for the first time in their history.

They now play on Saturday, without Tounesi, against a France side that finished just behind England’s Red Roses in Pool C.

England marched through their group phase matches to finish top of Pool C. The Red Roses proved their worthiness of being tournament favourites in games against Fiji and South Africa.

The World No.1 also beat France 13-7 to extend their record winning streak to 28 matches in all competitions.

Elsewhere, tournament hosts and reigning champs New Zealand booked their place in the quarterfinals with a first-place finish in Pool A.

Fellow southern hemisphere side Australia will join them in the knockout stage, as they finished second.

Additionally, Wales (also Pool A) crept into the last eight thanks to being one of the two best third-place teams.

In Pool B, Canada finished top of the final World Cup 2021 group, taking the maximum points. Italy came in second, with the USA qualifying third.

The winners of the first Women’s RWC scraped through Pool B despite losing to Canada and Italy.

So, who plays who next?

The knockout phase of the Women’s Rugby World Cup

The quarterfinal stage of the tournament kicks off this weekend.

On one side of the draw, Italy faces France, with New Zealand taking on Wales. Then, on the other half, England plays Australia while Canada will find a familiar foe in America.

Following the last eight, the semi-finals are scheduled for Saturday 5 November. But, like the rest of the tournament, these crucial matches are at a very early time for UK viewers.

The first semi-final is at 3.30 am, with the second following at a slightly more comfortable 6.30 am.

Finally, the tournament comes to a close on Saturday 12 November.

The two losers of the semis will go head-to-head in the Bronze final match (3.30 am kick-off).