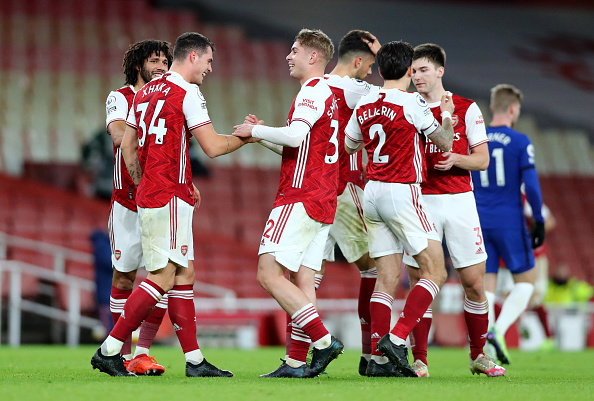 Arsenal capped off a miserable start of the season with a great performance against rivals Chelsea yesterday. Arsenal’s youngsters shone through as the Gunners picked their best result of the season winning 3-1 at the Emirates.

The result was a much needed one as the club had gone seven games without a win in the Prem. The pressure had been building on Mikel Arteta over the past few weeks as Arsenal fell to 15th table.

Due to injuries in the squad the Spaniard was forced to throw some of the younger players in the deep end.

Arsenal set out a 4-2-3-1 formation with the three behind the Alexander Lacazette having an average age of 19.3 years.

It was these three youngsters that shone for Arsenal on the night. The trio will have also firmly put themselves in Arteta’s mind for next game against Brighton.

A performance worthy of the man of the match award. Bukayo Saka showed that even at 18 years old he is a vital part of the current Arsenal team. The winger had an influence on two goals and was a constant threat with his silky dribbling skills.

Playing in the middle of the three was a player who joined the club at the age of 10. His hunger and desire were very impressive as he battled with Chelsea’s N’golo Kante throughout the game. It is this type of performance that will be a refreshing one for Arsenal fans as Smith Rowe left everything on the pitch.

The Brazilian was a threat while on the pitch, despite missing a few chances he was a constant menace to the Chelsea defence. After what has been Martinelli’s most difficult spell at the club, he performed very well and showed a hunger that has not been seen at Arsenal much this season.

The result will be a much-needed boost to Arsenal and Arteta who will now believe that his side can begin to get back up the table. The performance of the three Arsenal’s youngsters should give the Arsenal manager the confidence to call upon the other young talents at his disposal as he looks to turn a poor start to the season around.