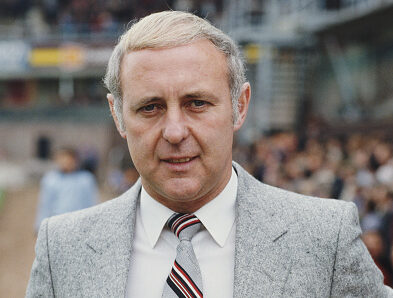 The Scot regarded one of the greatest British managers of all time due to his achievements with Dundee United.

McLean transformed the club and led them to their first and only Scottish League title in 1982-83.

He also managed Dundee United to their first ever major domestic honours when he won consecutive Scottish League Cups in 1979 and 1980.

McLean took over a struggling Dundee United side in 1970. He established a philosophy of developing homegrown talent to become some of the best in the division.

This philosophy proved to be successful as after 1975 the club never dropped below 5th place in the league again while he was in charge.

The Jim McLean era lasted 23 years and he continued to play a massive part of the club when he stepped down in 1993.

Dundee United honoured McLean’s incredible reign at Tannadice by renaming a stand at the stadium after him.

In 1983-84 edition of the European Cup, United made it to the semi-finals where they lost out to Roma 3-2 on aggregate. Roma went on to face eventual winner Liverpool.

A few years later McLean took Dundee United made it all the way to the 1986-87 UEFA Cup final, by beating Spanish giants Barcelona in the semi-final. Unfortunately, United could not win the competition and were defeated by Swedish side, IFK Goteborg.

McLean made Dundee United a force to be reckoned with in Europe. He was also part of the management team that took Scotland to the 1982 World Cup.

The football world has been deeply saddened by the news of the passing one of the best British managers ever.

Many touching tributes have been made to the Dundee United legend.