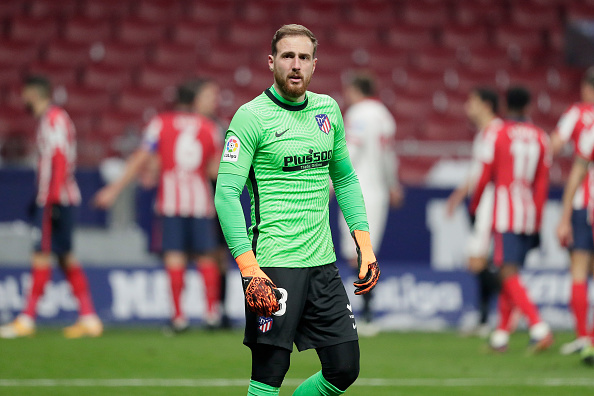 Atletico Madrid keeper Jan Oblak has been by far the best goalkeeper in the world this season.

The Slovenian got his 10th clean sheet of the season last night against Sevilla as Atletico went top of La Liga by four points with two games in hand. Diego Simeone’s team have been almost impenetrable this season only conceding six goals so far.

Atletico Madrid’s successes have been built on the foundations of Simeone’s solid defensive systems. The Argentine’s tactics have worked perfectly this season and have put Atletico in the driving seat for the La Liga title.

If Atleti can win their two games in hands then they would be ten points clear of city rivals Real Madrid.

Jan Oblak has been key to the teams form this season and the Twitter world has been raving about the shotstopper.

The stats show that Oblak has been the top dog in terms of all round keeping this season. The Atletico keeper just keeps on getting better and better with each passing year.

The pressure was on Oblak when he arrived at Atletico in 2014 in a €16million deal from Benfica, which made him the most expensive goalkeeper in La Liga history at the time.

Oblak has an incredible 152 clean sheets in 279 games in all competitions. At 28 he currently has the 11th most champions league clean sheets of all time.

He is also the highest rated goalkeeper in FIFA 21 with a rating of 91.

Liverpool fans will remember the frustration he caused them in last seasons Champions League. Oblak made nine saves in the victory over Liverpool which helped Atletico dump out the reigning champions.

Jan Oblak won four consecutive Ricardo Zamora Trophy between 2015 and 2019 and looks on course to win another this season thanks to his brilliant displays.

Do you think that Jan Oblak is the best goalkeeper in world football? Let us know @SPORF on Twitter