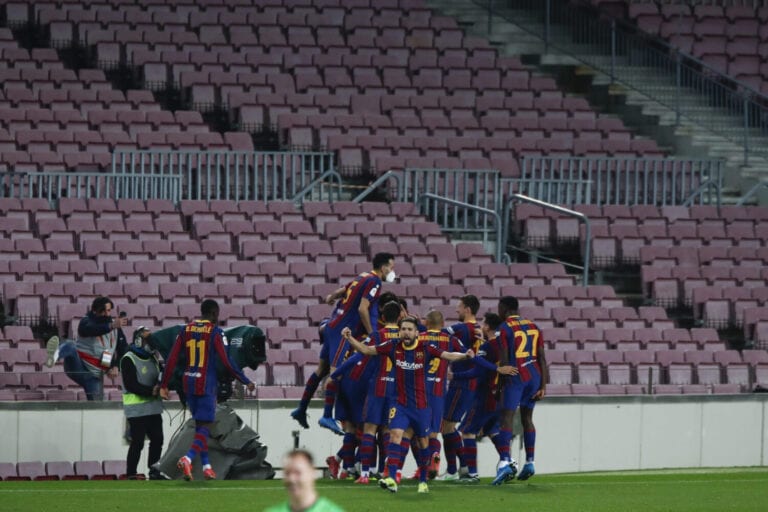 It might have been touch and go for a while, but Barcelona have shut down Sevilla’s attempts at trolling them on Twitter, after Ronald Koeman’s side progressed to the final of the Copa del Rey on Wednesday.

Sevilla won the first match of their two-legged encounter 2-0 last month, thanks to goals from Jules Kounde and ex-Barca midfielder Ivan Rakitic.

And after seeing their opponents suffer a heavy 4-1 defeat to Paris Saint-Germain in the Champions League the following week, the English version of Sevilla’s Twitter account were quick to respond.

An image of Gerard Pique holding onto Kylian Mbappe‘s shirt as the Frenchman sprinted forward went viral after the game, and Sevilla used the image to poke fun at Barca and their own Europa League dominance.

Julen Lopetegui’s side have won the Europa League on a record six occasions, but their progression to the Champions League last 16 means they won’t be taking part in the competition this season.

Barcelona would eventually have the last laugh when the date of the return leg rolled around.

On Wednesday evening, Ousmane Dembele opened the scoring in the 12th minute, but the hosts could not find a second goal.

That was until a stoppage-time header from Pique himself put Barca 2-0 ahead, forcing extra-time in the process. Martin Braithwaite scored what would prove to be the winning goal in the 95th minute.

Koeman called the victory “my happiest night as Barcelona coach“.

It also gave the club’s Twitter account the opportunity to fire back at Sevilla’s earlier trolling attempts with a simple message.

They replied: “Football is about respect. Bona nit (good night).”

Barca will face either Athletic Bilbao or Levante in the Copa del Rey final, set to be staged on April 17 in Seville.

They currently sit five points behind leaders Atletico Madrid in the LaLiga standings after 25 games, with Diego Simeone’s side having played a game fewer.