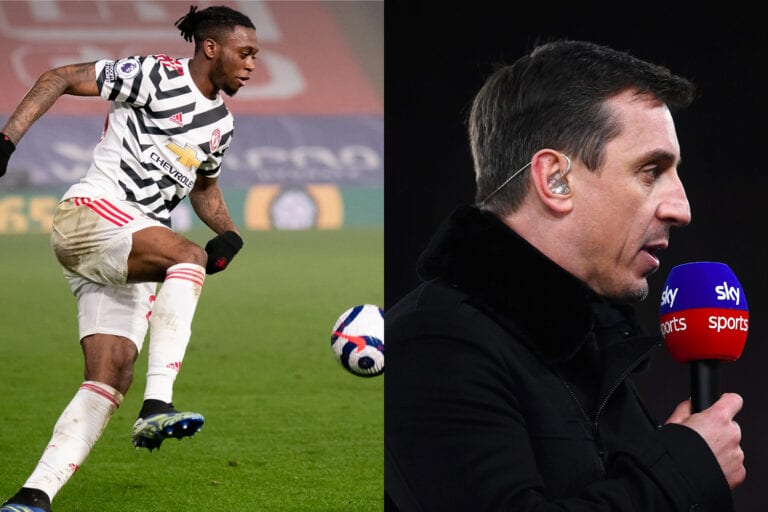 Gary Neville says he is impressed by Manchester United defender Aaron Wan-Bissaka’s commitment and one-on-one defending, and added that he “just needs to polish up his play”.

The Sky Sports pundit was responding to a comment from a fan on Twitter during a Q&A session.

Neville also compared Wan-Bissaka to himself when he was emerging as a United right-back.

Love his commitment , defending 1 v 1. Just needs to polish up his play. I was the same as a young RB https://t.co/4PEG4TCYOm

The 23-year-old has impressed for the Red Devils since joining from Crystal Palace in the summer of 2019, establishing himself as United’s leading right-back.

According to the Premier League website, he has completed 63% of his tackles and executed 42 clearances this season

He has received criticism over his attacking output on occasion, but the statistics show that he is improving that area of his game. He has two goals – no other Premier League full back has scored more – and two assists this season.

Speaking to Sky Sports in February, Wan-Bissaka discussed how he has developed his defensive game from a young age.

He explained: “Towards the age 17 onwards was when that [my tackling] got recognised, and since then I have focused on that more and added more to my game.

“Usually, before that, if someone wanted to take me on, I’d tackle them, now I’ll go and tackle them regardless.

“It’s been about learning to take control of those situations, rather than waiting for them.”

Neville was also asked for his thoughts on Liverpool right-back Trent Alexander-Arnold, who has eight England caps.

In response, he said: “Fantastic player.

“If he can keep improving his positional work/body shape when the ball is on the opposite side and central he will be the best English right-back ever.”

This campaign, the 22-year-old has scored once and provided three assists for Jurgen Klopp‘s side. He notched 13 assists in the 2019/20 season – only bettered by Manchester City’s Kevin de Bruyne.