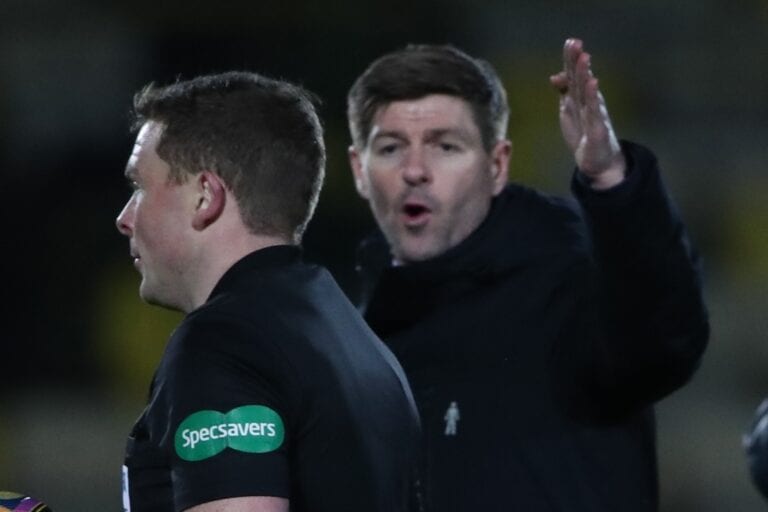 While the league leaders did manage to beat Livingston 1-0, it wasn’t all plain sailing. Prior to Alfredo Morelos’ 87th minute winner, the forward’s biggest contribution came in a pretty controversial first half incident.

Morelos was handed a yellow card for diving when it appeared as if Max Stryjek had made contact with him. Once the half-time whistle blew, Gerrard wanted to speak with Beaton about the decision.

After Beaton refused to engage, the former Liverpool man didn’t take too kindly to the lack of explanation.

“I know why you won’t speak to me, because you’re f*cking bang wrong,” Gerrard could be heard saying.

“You’re bang out of order.”

Gerrard initially saw yellow for his outburst, but rather than leaving it there, he continued to voice his frustrations, leading the ref to double down on his punishment.

As previously noted Morelos did manage to win the game for Rangers, however the victory was no doubt hampered by losing their manager.

The exchange will only add fuel to the ongoing debate surrounding officiating at the minute. A number of high profile, contentious decisions over the last few weeks have led many to call from further clarity on both rules and the decision-making process.

Footage from a 2019 A-League fixture recently resurfaced, which saw Jarred Gillett mic’d up as he took charge of a match between Melbourne Victory and Brisbane Roar. The result was met with overwhelming positivity, as Gillett could be heard explaining and expanding on how he came to his decisions.

Jarred Gillett had a microphone attached for his last game in Australia.

• Every decision explained
• Every convo with a player heard

This is the way forward!!