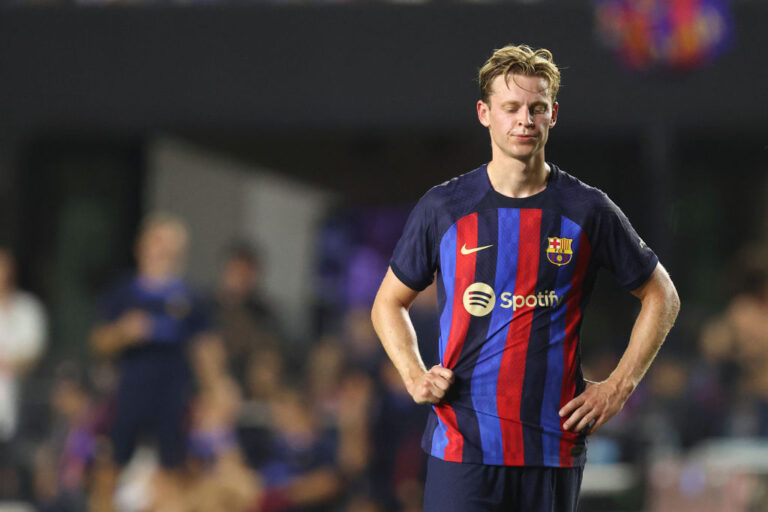 In the latest twist in the Frenkie de Jong transfer saga, Xavi has revealed that he will play the Dutchman in defence, which Manchester United fans view as an attempt to push him out.

Since the transfer market opened its doors, Erik ten Hag has desperately tried to bring his countryman to Old Trafford. And due to the Spanish club’s financial difficulties, they were more than willing to accommodate. According to The Atheltic, the two sides agreed on an €85 million deal.

However, despite reaching the 2018-19 Champions League final with United’s new manager, De Jong had his heart set on staying in Barcelona. Thus personal terms couldn’t be reached. This has undoubtedly left the Spanish giants in an awkward position.

According to Marca, Barca owes the midfielder €88.5 million for the fixed salary and loyalty bonuses in his contract. In addition, they have €8 million to pay over a four-year period if he plays 60% of the games and a maximum of €12.8 million if he reaches the final of the Champions League.

Obviously, De Jong wants that money, and the Spanish giants don’t want to pay it.

According to esteemed journalist Fabrizio Romano, the Barcelona head coach will utilise the 25-year-old as a defender.

Xavi reportedly said: “I’m not here to send messages. I already spoke with Frenkie. I value him very much. He’s a key player, but then there’s economic situation and Financial Fair Play.”

“He can give us a lot also as a centre-back.”

This has angered Manchester United fans who believe that Xavi is intentionally playing De Jong out of position to bully him into leaving the club. Consequently, they’ve taken to Reddit to voice their opinions.

One fan sarcastically pretended to quote Xavi by saying: “I’m not here to send messages. But I’ll play you in defence if you don’t leave!”

While another said: “Putting him at CB isn’t the worst part of the offer – it’s that he’ll be a backup, reserve CB. They’re bringing in Kounde and already have actual centre-backs. De Jong is so far down the pecking order.”

A third pointed out: “De Jong’s loyalty to Barca may prove to be the worst decision of his career. Xavi was already subbing him off last season in favour of 17-year-old Gavi. Now he’s playing him at CB. If he joined us, he’d become an instant key player, Ten Hag knows how to utilise him, and we’d appreciate him much more as a fanbase. I hope he changes his mind.”