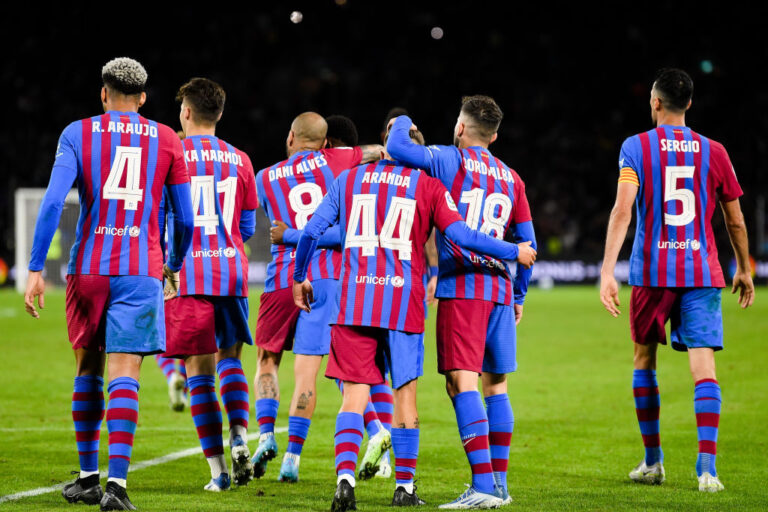 Barcelona have officially released their away kit for the 2022/23 season.

As previously reported by Sporf, images of the kit had leaked before the official release. We knew that the gold offering would make reference to the 1992 Olympic Games, which took place in the city. They make this nod with the trimmings on the sleeves.

The five Olympic rings round off each sleeve. These rings represent the five continents (Europe, Africa, Asia, Australia, and America) competing at the Olympics.

The tagline for the new shirt (and yes, the new shirt has a tagline) is ‘the flame lives on’. If the reference isn’t obvious, it is to the Olympic flame. The flame is a symbol of continuity between each set of games. Barcelona are paying tribute to its legacy within the city.

The Spotify logo and the Nike swoosh both appear in navy blue, as does the club badge. The club website explains the intricate design on the front: “Gold is the absolute protagonist of the new design, which also includes the pattern of the map of Barcelona, highlighting the Eixample, Montjuic and Barceloneta in homage to the 1992 Games while the trim at the end of the sleeves features the colours of the five Olympic rings.”

Barcelona preparations for the new season

After enduring a difficult start to the 2021/22 campaign, Barcelona recovered their good form after replacing Ronald Koeman with Xavi. The World Cup winner couldn’t prevent an early Champions League exit but secured qualification for next season.

Barcelona have yet to make any major signings in this transfer window. However, new signings are likely, with Robert Lewandowski heavily linked. Additionally, Ousmane Dembele could renew his contract. The club wishes to sell valuable players to raise funds. With this in mind, Man United target Frenkie de Jong is the likeliest to leave.