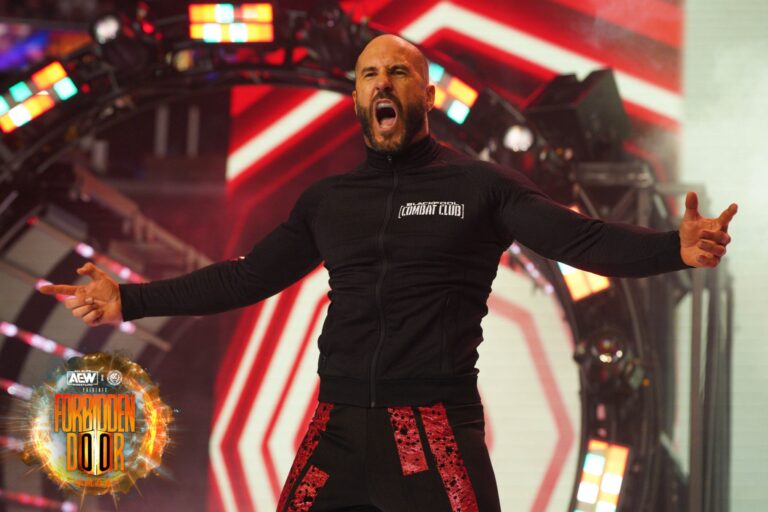 Claudio Castagnoli made his long-awaited AEW debut at AEW x NJPW Forbidden Door – and he couldn’t resist making a trademark joke on his way to the ring.

Castagnoli had been out of contract after his tenure with the WWE ended in February 2022. The news of his departure surprised and saddened WWE fans and wrestlers alike. Under the ring name Cesaro, Castagnoli was popular with the crowd and the dressing room. However, a main-event push wasn’t forthcoming and appeared to be the impetus for his departure.

Immediately after his exit from WWE, fans speculated if he would make a move to rival wrestling company AEW. They had to wait months for it, but it didn’t disappoint.

Claudio got a huge pop before his debut win

As it’s likely that he will go by the ring name Claudio, that’s how we’ll refer to Castagnoli henceforth. Bryan Danielson had teased that a mystery man would appear at Forbidden Door. Zack Sabre Jr waited for his mystery opponent to appear, and when he did, the crowd erupted. Claudio was ‘over’ from the moment he made his entrance, and he secured the win in an entertaining match, subduing his foe with a lariat and a powerbomb.

Claudio is now the newest member of the Blackpool Combat Club. Consequently, he will participate in the Blood and Guts match on Dynamite this Wednesday night.

Regardless of the name that he wrestles under, Claudio will never lose his trademark cheesy humour. Jox Moxley’s autobiography Mox mentions multiple Claudio jokes from their time together in WWE. ‘Joke Claudio told me: I had a dream I swam in an ocean of orange soda. But it was just a Fanta sea.”

With this in mind, it’s no surprise that he stopped by the cameraman on his way to the ring. Fans had speculated that a cameraman was Claudio in disguise and that this would be how the former WWE star would make his AEW debut.

While they were wrong, Claudio acknowledged the resemblance between him and the technician. He posed next to the cameraman, who was the same height and a similar build, pointing at the resemblance with his index finger.

You can see the funny image below.