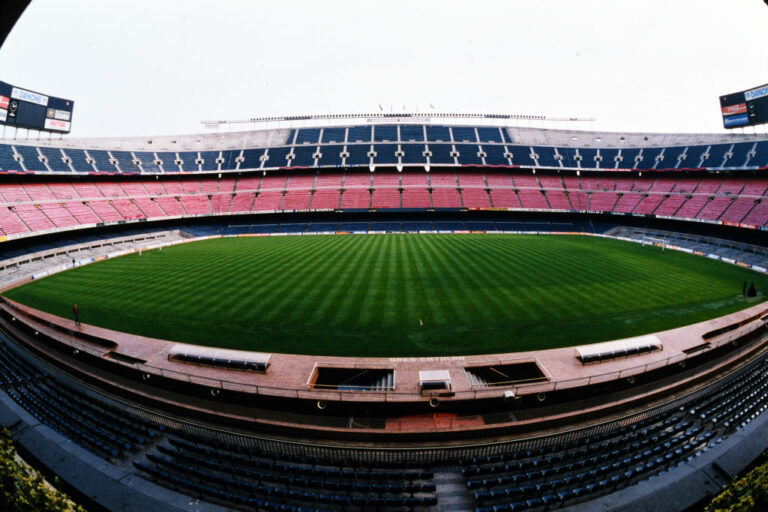 Barcelona will vacate Camp Nou for the entirety of the 23-24 season.

The spectacular ground has housed the Catalan giants since 1957. But due to the club deciding to give the 99,354 capacity stadium a colossal renovation, they’ve had to move elsewhere. This will undoubtedly dishearten fans who’ve witnessed their club win 20 La Liga titles in the stadium. But once the work is done and dusted, they’ll likely flock back to the new and improved Camp Nou with a spring in their step.

The Spanish stadium has made headlines recently for multiple reasons. On March 15, Barcelona announced its historic deal with audio giants Spotify. The agreement between Barca and the Swedish streaming company is incredibly significant.

Spotify have become Barca’s leading partner and their official audio streaming partner. Their logo will take centre stage on the front of both the men’s and women’s team shirts for the next four seasons. But, the most eye-catching element of the story is that the notorious Nou Camp will receive a significant rebrand. The ground will now be referred to as ‘Spotify Camp Nou.’

The news hasn’t gone down too well with hardcore fans, but on the bright side, their supporters were given a real treat on March 30. Barcelona Femeni beat Real Madrid and broke the world record for attendance at a women’s game. The humongous El Classico clash saw a whopping 91,553 fans squeeze into the Nou Camp.

But now fans are focused on what’s changing at their famous ground.

What will Barcelona change at Camp Nou?

As per ESPN, the three-time Champions League winners have planned some massive alterations. Barca intend on investing a whopping €1.5 billion to turn their ground into a 105,000-seater stadium that is “at the avant-garde of technology.”

The revitalised stadium will feature a retractable roof covered in 30,000 environmentally friendly square metres of solar panels. They will then use the energy collected to fuel their new 360-degree screen that will run around Camp Nou’s interior.

President Joan Laporta has faith that the changes are for the better. But they’ll take a whole season to complete. So it begs the question, where will Barcelona fans have to go to watch their team throughout the 23-24 season?

Barcelona have secured their new ground

As per esteemed football reporter Alfredo Martínez, Barcelona will play their football at the Montjuic Stadium. The ground has a deep history in Spanish sports, as it hosted a large portion of the 1992 Olympics and Paralympics. But despite overlooking a beautiful harbour, supporters have a massive reservation.

The ground only holds a maximum capacity of 60,713. This is a considerable 38,641 less than the Nou Camp. Therefore, there’s no possible way that a massive percentage of the fans won’t miss out on attending the games. They can only hope that the renovations to their historical ground are worth it.