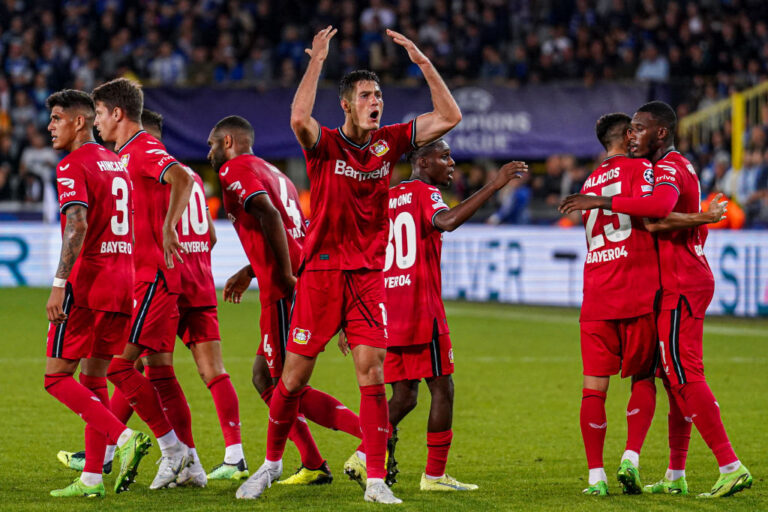 Bayer Leverkusen were on the wrong end of an unbelievably tight offside, seeing a goal disallowed during their Champions League game against Club Brugge on Wednesday.

The Bundesliga club suffered a 1-0 defeat in their visit to the reigning Belgian Pro League champions.

Following a spirited start to the match, Leverkusen came inches from going ahead. Winger Moussa Diaby fizzed a shot at goal, forcing Brugge keeper Simon Mignolet to tip the strike onto the post.

However, the hosts managed to take the lead just before half-time. Andreas Skov Olsen whipped in a corner for Brugge, which young defender Abakar Sylla met with his head. His powerful effort was gathered by Leverkusen keeper Lukas Hradecky.

Unfortunately, the Finnish international’s momentum carried him over the goal line, giving Brugge a slender lead.

Following the interval, the German visitors offered much more attacking threat. Bayer Leverkusen even had two goals ruled out for offside, but could not get on the scoresheet.

Despite a late Adam Hlozek free-kick testing Mignolet once more, Brugge held on to go second in Group B. Meanwhile, Leverkusen succumbed to their fifth defeat in six games in all competitions.

Bayer Leverkusen may feel hard done by, though, as one of their offside goals came down to a fractional VAR decision.

Just past the 70th minute, the Bundesliga giants worked the ball towards a dangerous area on the left-hand side. Chelsea loanee Callum Hudson-Odoi swung in the cross which forward Patrick Schick glanced home.

However, VAR had spotted a potential offside.

It was not the goal scorer, though. Instead, the cameras were checking if Bayer Leverkusen defender Jonathan Tah was offside. This is because he also jumped to head the cross, and thus was “active” in the play.

After a check with the new, semi-automated VAR system, officials judged Tah as fractionally offside. Looking at the image from Reddit below, you can see just how tight the decision really was.

As a result, Schick’s equaliser was unfortunately scratched off, much to the delight of the home fans. This ultimately proved decisive as Brugge took the 1-0 win.

Group B so far

Atletico Madrid claimed a dramatic, injury-time victory over Porto in the other Group B fixture.

The Spaniards waited until the 90th minute to take the lead thanks to Mario Hermoso. But the defender quickly went from hero to villain after conceding a penalty, which Matheus Uribe dispatched. Porto thought they had earned a point – but there was still time for one last twist.

Incredibly, in the eleventh minute of injury time, Antoine Griezmann snatched the 2-1 victory for Atletico, sending the fans at the Wanda Metropolitano into a frenzy.

The result leaves Atletico top of the group, with Brugge joining them on three points too. In contrast, Leverkusen and Porto are yet to get off the mark.

Next week, the Belgian champs travel to Portugal to face Porto, with Atletico Madrid visiting the BayArena on September 13.