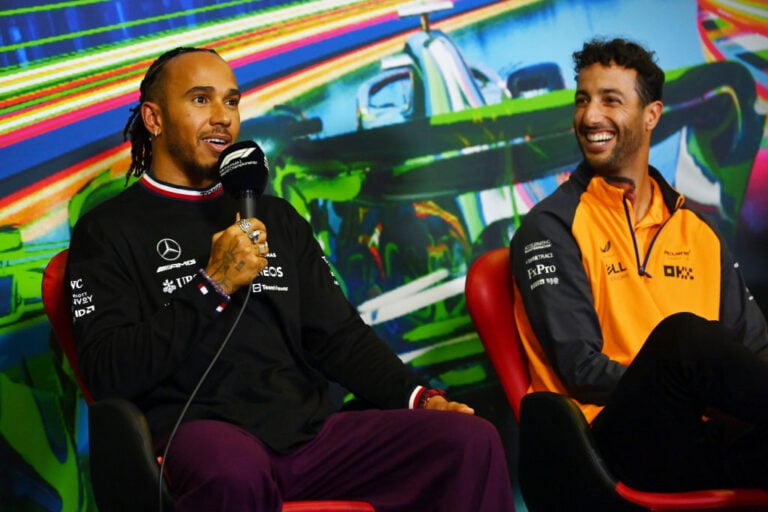 Lewis Hamilton backed Daniel Ricciardo to find a race seat for 2023 after fielding a question that asked if the McLaren ace would be a good reserve driver.

Ricciardo’s F1 future is currently up in the air after recent developments in the driver market. At the end of August, the Australian announced that he would be leaving McLaren following the 2022 season.

In his place, McLaren managed to prize Oscar Piastri away from his Alpine contract. Therefore, Ricciardo’s compatriot will take the vacant spot next to Lando Norris for 2023.

“Following several months of discussions with Zak & Andreas, we have decided to terminate my contract with the team early,” announced Ricciardo, via Sky Sports. “And we agree to mutually part ways at the end of this season.

“I’ll be announcing my own future plans in due course. But, regardless of what this next chapter brings, I have no regrets and am proud of the effort and work I gave to McLaren. Especially the win in Monza last season.”

This weekend, Formula 1 heads back to Monza, where Ricciardo brilliantly took victory at the 2021 Italian GP. The win sparked wild celebrations for both team and driver, as it was McLaren’s first Grand Prix victory in nine years.

Contrastingly, at the 2022 race, the Australian’s future in the sport is a hot topic of conversation.

During Thursday’s driver press conference, Lewis Hamilton was asked for his opinion on Daniel Ricciardo becoming a Mercedes reserve driver. The seven-time Drivers’ Champion gave the question a decisive response.

“Well, I think he should be racing, personally,” said Hamilton, via Sky Sports F1. “I think he’s far too talented to be out, and he’s earned the right to be amongst us all racing.”

Despite wanting to see the Australian on the grid in 2023, Hamilton conceded that he would be welcome at the Silver Arrows.

“But, of course, if he’s a part of our [Mercedes] team, it would be great. But the role is not really what I think is best for him.

“If I was managing him, he would be racing.”

Although he has Hamilton’s backing, options for next year are slim for Daniel Ricciardo.

There are currently just five slots available on the 2023 F1 grid. Firstly, Alpine are still yet to find a replacement for Fernando Alonso. The Spaniard raised eyebrows when he confirmed a switch to Aston Martin during the summer break.

However, Alpha Tauri’s Pierre Gasly seems primed to take the seat at Alpine, per Autosport. This transfer hinges on Colton Herta, though. The IndyCar driver is edging towards Alpha Tauri but needs an FIA super license first.

Elsewhere, both Alfa Romeo and Haas have spots that Ricciardo could fill. Alfa have not confirmed Zhou Guanyu for next season, although they will decide by the end of September. Meanwhile, Mick Schumacher is nearing the Haas exit door. If he goes, the US outfit would love Ricciardo, if they can get him on a reasonable salary.

Finally, Williams still need to confirm their second driver alongside Alex Albon. Nyck de Vries could be taking this place after Williams called him “worthy” of an F1 drive, per F1i.com. This would force Nicholas Latifi out as a result.

Ultimately, Ricciardo’s options in F1 look limited. But that’s not to say there won’t be opportunities, and the Mercedes reserve void may be one he takes if it is offered to him.